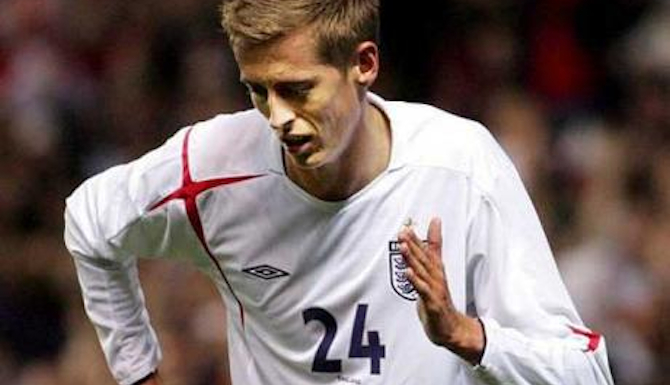 It’s been seven years since Peter Crouch was wowing us with his dumb robot dance celebration but he’s finally brought it back – on the dancefloors of Ibiza.

It’s kind of crazy to think that it was seven years ago when Peter Crouch was scoring for fun for England in a few warm up games before the World Cup and busting out his crazy robot dance celebration that everyone seemed to love. Then the actual World Cup came – and despite Steven Gerrard saying stuff like ‘I see Peter Crouch becoming the top scoring Englishman of all time’ – he didn’t really play and England got dicked by Germany in a match that still hurts the fragile footballing psyche of this nation today, and probably will forever.

Crouch subsequently retired the robot celebration and promised that he would only pull it out again if he scored in a World Cup final or a Champion’s League final, which is pretty optimistic on his part huh? I mean I know he actually DID play in a Champion’s final with Liverpool but I mean come on, did he really think that either of those things were going to happen when he said that? Baffling.

Anyway, Crouch must have realised that by playing for Stoke he wasn’t going to get into the Champion’s League final any time soon, and nor was he likely to win a recall to the England squad, let alone help them get to the World Cup final and score in it. So, whilst on holiday in Ibiza (party animal huh? Someone once told me they saw Peter Crouch and James Beattie bare mashed in a club gurning their faces off. I didn’t believe him but maybe it is actually true?) Peter Crouch decided to bust out the robot dance with his wife Abby Clancy. I guess some promises are meant to be broken.

Check out some footage of the epic dance move below. The second video is probably the best because he looks like a complete pillhead and the guy who’s filming it is really mashed and keeps making faces into the camera and saying stuff like ‘Go on Peter lad.’ Ibiza huh?

Daggering – How To Dance To Reggae