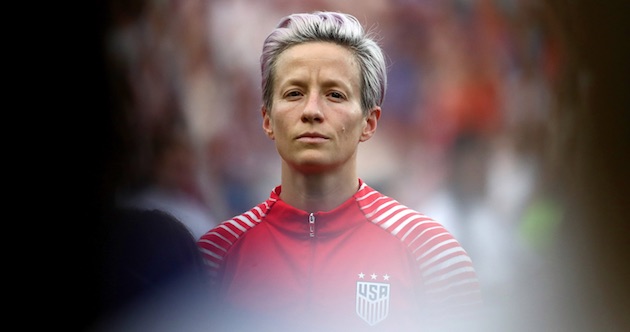 Was she in the wrong here?

You probably remember Megan Rapinoe from a couple of years ago when she was the main star at the USA won the women’s World Cup, but you probably hadn’t heard that she was the new face of Victoria’s Secret after the company decided to move away from supermodels to promote their brand.

Rapinoe is famous for her anti Trump rhetoric and left wing activism, but following the announcement of her deal with Victoria’s Secret, an old tweet has resurfaced and people are now trying to cancel her for racism:

@tasha_kai00 u look asian with those closed eyes!

Calling on her sponsors and associations to stand up and #StopAsianHate

Today, I learned that soccer star Megan Rapinoe is a racist.

I also learned that Victoria’s Secret has not denounced Rapinoe for her anti-Asian hate.

How does Victoria’s Secret roll out an announcement like this without doing basic diligence? Or perhaps they did their diligence and they were OK with this.

THE NEW FACE OF VICTORIA’S SECRET WITH A RACIST ASIAN COMMENT! I BET
MEGAN RAPINOE WILL NEVER GET BACKLASH SINCE SHE’S SO “WOKE”! #STOPASIANHATE https://t.co/gBoAtrom03

Looks like the new face of Victoria’s Secret, Megan Rapinoe, mocked Asians. If true, definitely sounds anti-Asian to me. Is this who @VictoriasSecret wants to be associated with? Can’t be that great for it’s brand. https://t.co/7sFmvXNRwv

OK so I don’t want to get cancelled myself and obviously as a white man my viewpoint/experience is slightly skewed, but I don’t think this is the most awful thing that Rapinoe could have said? Yes, I respect that it’s not great and if Asian people are saying that it’s racist then we need to listen to them, but surely Rapinoe could apologise and explain that was uneducated about the situation and it would probably be OK? It’s not like she’s out there beating up Asians or anything? People need to chill out.

For more of the same, check out everyone calling her an asshole for the way she signed some kid’s ball. People really do have too much time on their hands.