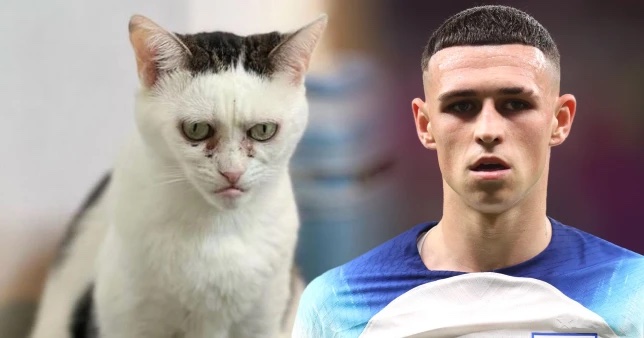 Phil Foden was finally unleashed by Gareth Southgate and England on Tuesday night against Wales and promptly repaid his selection choice by scoring a goal and winning the free kick from which Marcus Rashford scored, but now that he’s in the spotlight some England fans think that he looks exactly like this strange cat.

The picture of the cat was discovered by film director Glenn Kitson, who regularly posts pictures of celebrity lookalikes on his Instagram account. Many people were enamoured with this comparison, with some saying that it was his greatest work yet.

I mean he has got a point, the cat does look like Phil Foden with his stupid chavvy haircut and weird eye slits and slightly concave face that looks a bit like a character from the ‘Goldeneye’ video game. There’s definitely an uncanny resemblance there. Fair play for spotting it.

Let’s hope that this comparison doesn’t put Fodes off and he manages to do the business yet again against Senegal on Sunday. If he starts of course. Come on Southgate – let him off the leash.

For more of the same, check out when Phil Foden got into a heated argument with his girlfriend on holiday this summer. Pretty embarrassing really.