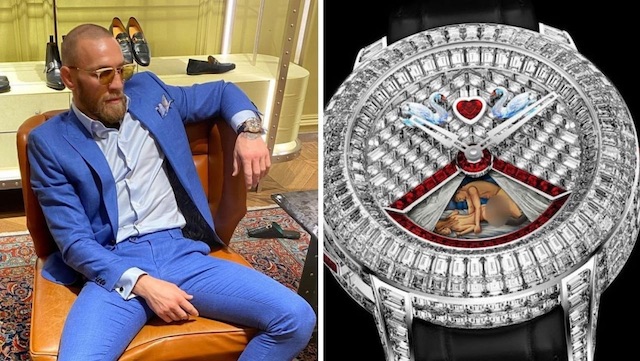 I mean it does look shit doesn’t it?

Conor McGregor is fighting Dustin Poirier next week at UFC 257, but most of the hype in the buildup to the event has revolved around Conor McGregor buying a really weird new watch with a secret sex compartment for a couple of million dollars.

If I were Conor McGregor, I would simply not spend a million dollars on a watch.

@TheNotoriousMMA new watch is something serious

Conor McGregor has been on Fight Island in Abu Dhabi for a week.

At last, someone’s found something to do with their Gü ramekin… https://t.co/Bh3mF3UMjJ

Spend a million dollars and you too can look like you’ve gaffer-taped a jam jar full of Quality Street to your wrist https://t.co/dvMZWDBRNd

The black wrist band keeps it from being garish. https://t.co/62msqTBiTz

*Bookmarks for the inevitable “And now I’m bankrupt” interviews in 3 years. https://t.co/X1ghzPU9Vc

When you meet Del Boy down the market and he bamboozles you into another purchase https://t.co/8dhsysR9F3

This looks like when they brought back yoyos in the late nineties but tried to make them look cool and futuristic. https://t.co/3k63WMeP3p

I had one of these out of a cracker at Christmas, you have to get the little blue ball in the hole !! https://t.co/zecPFFPVQJ

“What time is it Conor, mate?”

Looks like something that would cost 3000 tickets at Blackpool Central Pier! https://t.co/9YCLjSyzLJ

Damn, the internet really isn’t holding back there is it? I doubt Conor McGregor is going to care too much though as he doesn’t strike me as the kind of person who values the opinions of people who are way less rich than him. Sure he’ll just continue to buy stupid things like this watch that most of us could only dream about. So it goes.

For more of the same, check out when Conor McGregor punched an old man in the face. That was a bit off.