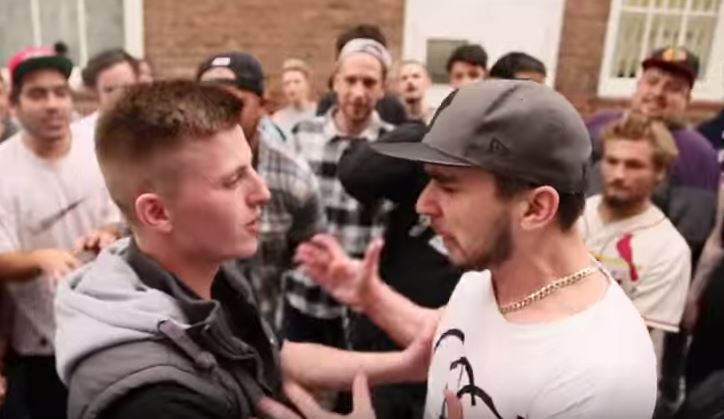 This guy isn’t having the greatest of months.

This Mac Sherry guy’s having a tough time of it lately. Just the other week we saw how he pulled a spectacular whitey mid-battle and basically gift wrapped his opponent the victory, and this week he’s battling a dude named Pedro who properly emasculates him by first stealing his mate’s hat and glasses and lobbing them in the air, then ripping Sherry’s shirt in front of everyone.

Pretty classless move really, not sure it would go over too well in any other battle league but this being King of the Ronalds it’s somewhat encouraged. The guy who runs the league is standing there going “Punch him!” FFS — pretty funny on one level because it’s so outrageous but also completely uncalled for and just makes this Pedro guy look a bit of a knob, not least because Sherry seems a decent fella at the end of the day.

Battle itself was kinda shit though wasn’t it? Nothing on the time Philadelphia rapper Rone completely obliterated his opponent with ruthless non-stop fat jokes.