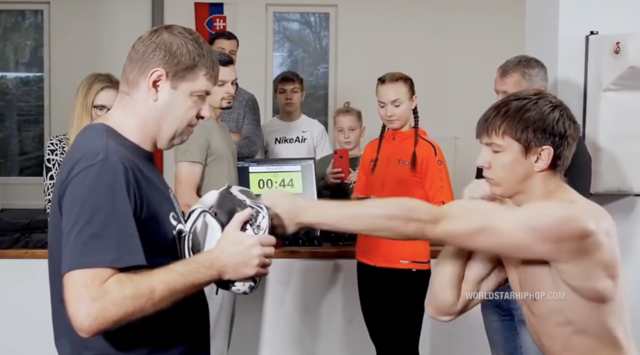 No one’s beating this record for a while.

When I first saw this video of kickboxer Pavel Trussov showing off how fast he can punch, I thought it might be sped up a little bit. But nope, the guy really did manage to fire off 334 full-extension punches in just one minute, setting a new Guinness World Record in the process.

Jeez! Guy punches faster than I can count. His muscles must have been on fire by the end of it.

As if 334 punches in one minute wasn’t enough, Pavel just had to stunt on us that little bit harder by also pulling off 919 punches in three minutes – another world record:

Wow. I don’t want to know how many times Pavel has watched Ip Man but I’m guessing it’s a lot. Can you imagine how fast Pavel wanks? Never mind, don’t want to think about that either. I just know it’s very fast indeed. Definitely some chafing involved too.

Anyway, really makes you feel good about yourself watching him smash all kinds of punching records while the rest of us unknowingly compete for most hours accrued on the couch doing fuck all. Cheers Pavel! Keep doing what you’re doing and making all the rest of us look bad.

To watch a racist man on the London Underground get KO’d into oblivion with one punch, click HERE. Classic.