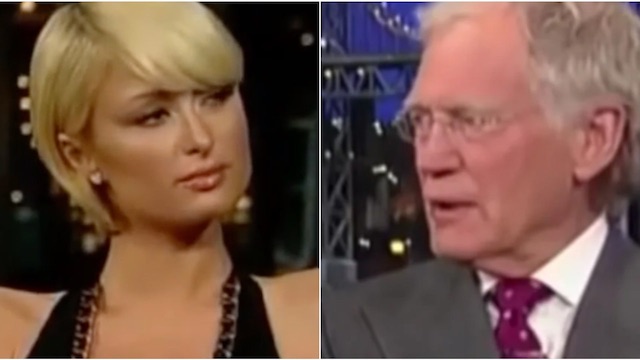 Letterman is on the verge of getting cancelled.

It was fairly surprising to me a couple of weeks ago when David Letterman was targeted on the internet over an interview with Lindsay Lohan from a few years ago where he mocked her addiction issues, as I really didn’t know much about his routine and figured he was just a much loved talk show host over in America.

Turns out this might not be the case though, after his Lohan interview was widely condemned and a bunch of other clips surfaced of him not being so kind to some of his other guests over the years as well, including Paris Hilton. She’s now taken the step of coming out in and slamming him as well for the way that he treated her back in 2007, where he asked her about her three week stint in jail for driving with a suspended licence.

Paris clearly did not want to talk about this, as you can see below:

Yikes. Paris brought up the incident again on her podcast in the wake of ‘Framing Britney Spears’ documentary and the Lindsay Lohan video going viral, saying the following:

At this point, I hadn’t done an interview in months and months because I didn’t want to talk about it.

Letterman’s team kept contacting my PR team to have me on the show and we kept on saying no and then months later I had a fragrance coming out and his team called again and basically my PR team made a deal with him that was off limits and he wouldn’t discuss it and I’d only be there to promote the perfume and other business ventures.

And I felt like it was a safe space because I had been going on Letterman for years. He’d always have fun with me and joke around, but I thought he would keep his word on this.

It was like he was purposely trying to humiliate me. During commercial breaks I would look at him like, “Please stop doing this, you promised me you wouldn’t talk about this. It’s the only reason I agreed to come on this show. Please don’t bring it up again.”

And then he’s like, “OK”, and he goes again, like the whole audience was getting to laugh. It was just very cruel and very mean.

And then after it ended, I just looked at him and said, “I’m never coming on this show again, you crossed the line.”

I didn’t tell him off, because I’m not that kind of person but I got angry and he was apologising and sent a case Château Lafite wine to our house.

I suppose maybe he was genuinely upset about offending her? He did make a public apology the next time that Hilton was on the show in early 2008, just four months after that appearance and vowing that she would never go on it again. I guess everyone in Hollywood is willing to swallow their pride and take one for the team if it makes them more money/gets them higher ratings hey?

Good on Paris for coming back and owning him. As for Letterman, it looks as if he’s teetering on the edge of cancellation for his past behaviour during his talk show host prime. Be interesting to see if he makes it out, but he’s pretty much out of the public eye now so it probably isn’t quite as big a deal for him here as some people. We’ll see.

For more of the same, check out Letterman’s interview with Lohan. Kinda gross to be fair.