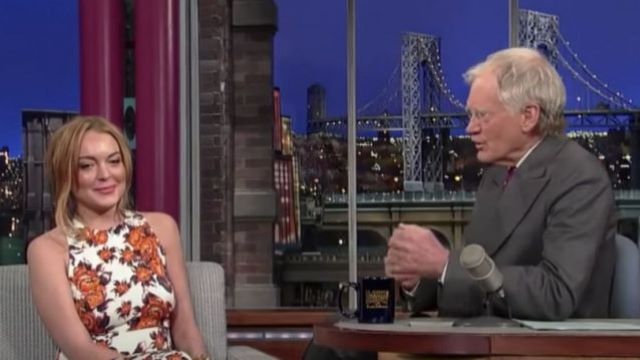 Can you ‘cancel’ a person/show that isn’t even on TV anymore? Well a bunch of kids over on TikTok are trying after a 2013 interview between David Letterman and Lindsay Lohan was shared on the app, leading to criticism of the talk show host’s treatment of the actress.

User @calabasaswings shared a portion of the interview in which Letterman appears to take Lohan by surprise when asking about her drug addiction and rehab (which was highly publicised at the time):

A bunch of TikTok users started complaining, calling Letterman’s interview “unfair”, “outrageous”, “wrong on so many levels” and all the rest of it. Which is pretty stupid because most of the people commenting on TikTok were literally toddlers when the interview took place, and have no idea who David Letterman is or what his relationship with Lindsay Lohan is really like.

Of course there’s no mention of the remainder of the interview, in which Lohan thanks him for being sweet, and Letterman bigs her up for her courage and honesty. You can watch that below:

(12:08 if it doesn’t automatically start there)

That’s the thing with these little idiots trying to ‘cancel’ people for fun on social media – they don’t actually have a clue what’s going on in the real context of things. The best part is David Letterman probably doesn’t have a clue any of this is happening, as he’s long since retired and doesn’t have to acknowledge nameless losers talking shit about him on social media. I bet Lindsay Lohan doesn’t care either, given it happened 8 years ago.

So yeah, maybe these TikToker should stick to dance moves and wacky #challenges and stop trying to ruin people over things they don’t even understand. How soon before you’re able to ‘cancel’ someone for something they did in a past life?

For the time Lindsay Lohan said her dog ‘Gucci’ lived until he was 27 years old, click HERE. Not likely.