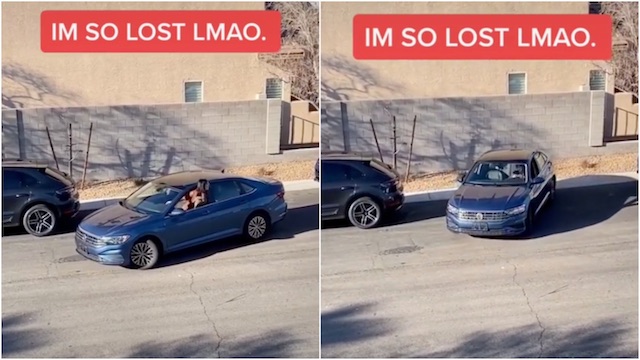 It’s safe to say that pretty much anyone who has ever parallel parked has probably had that one space that they just can’t seem to crack no matter how many times they attempt it and it just gets worse and worse the longer it goes on as you feel people watching you and you just get more and more helpless turning that wheel, maybe eventually just giving up and parking somewhere else. We all know how that goes.

That isn’t what happens in this TikTok below though as the woman in question gets some help from a passerby with her parking, although it definitely doesn’t end how you think it would. Make sure you watch this to the end because you really won’t see this twist coming:

Why did she do that? I suppose if you think that she’s being nice and/or not stupid then you could argue that her letting the woman finish her parallel parking bit might make her feel a bit better and like she’s achieved something, but I think most of us would agree that it would make more sense for both of them if she just moved her car in the first place. That’s clearly what anyone in their right mind would have done, hey? Such a weird flex.

I bet the woman parking had her jaw drop when she saw her drive off like that in the end. Mad.

For more of the same, check out this woman who took seven minutes to reverse out of a parking space. That’s too long.