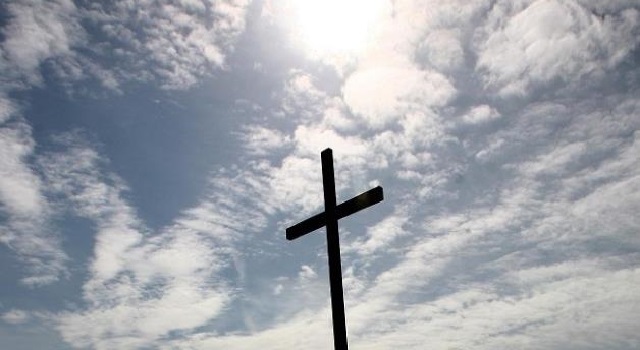 Eight men and one dedicated wife have chosen a peculiar way to protest the loss of their jobs.

In a rather extreme protest against being laid off, 9 people have crucified themselves in Luque, a small town near the capital Asuncion. A man named Juan Villalba is leading the demonstration to protest a series of layoffs of union organisers at the Vanguardia bus company. Of the 9 people, 8 are bus drivers who have recently been let go, and one is the (either very devoted, or horribly oppressed) wife of Villalba, who joined the protest last week in an amazing display of solidarity. The drivers have currently been crucified for around 20 days.

Mr Villalba has stated that they will not give up their protest until all 8 men are re-instated, and alleges that they have been sacked for asking for benefits such as overtime pay and health insurance, and adds the further, iconic rallying cry which will surely be chanted in protest by any person who drives to earn a living: “The drivers are tired of being exploited!”

Spray paint that on the walls, brother, I am behind you. The protesters have hammered nails through their hands to wooden crosses, which are led on the floor. I must confess the image in my head was a little more extreme than that (I imagined half-naked men, 20 feet in the air screaming “Father, Why have you forsaken me?”). But still, you can’t deny that this is a bold statement. It also seems to be having some effect as Company manager Aufredi Paredes has said that five of the drivers will be re-hired.

At a basic level, this is a handful of people protesting unfair treatment. To take it to this extreme, however, is truly astonishing. I must confess myself inspired, and should any similar occasion arise in my own life, I will not hesitate to follow the steps of Juan Villalba. If actions speak louder than words, these men are screaming bloody murder.

Another Mental, Less Inspiring Bus Driver: Russian Bus Driver Smashes Into Cars Who Cut Him Up