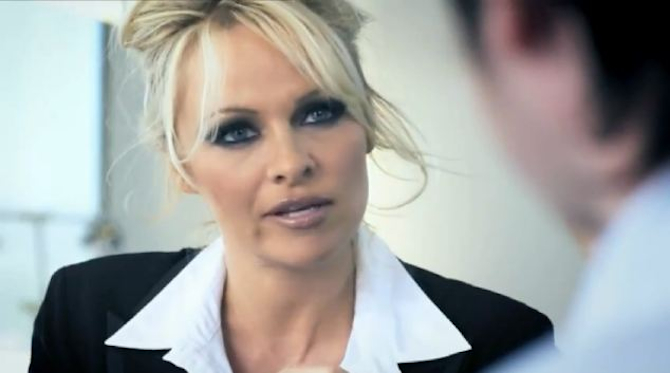 A new advert featuring Pamela Anderson as a sexy businesswoman has been banned for being sexist and degrading for women but is it really that bad? Check it out and let us know what you think.

Well, the prudes at the UK Advertising Standards Agency have spoken again after banning this advert for CrazyDomains.com featuring Pamela Anderson for being sexist and degrading towards women. To be fair, all they’ve probably done by banning it is drawing publicity to it and getting everyone who was interested in seeing it to watch it online (as it’s readily available on YouTube as it’s an Australian advert that has already been out for three years) which is a much more useful platform for the company it’s advertising, so it kinda looks like everyone is a winner in this situation.

The advert itself is pretty naughty so I can see why it’s banned but I still think it’s kinda lame of ASA to do it because I’m sure I’ve seen similar adverts on TV that are at least as graphic, or adverts that are at least kinda similar and feature women or men using sex to sell products. I mean isn’t that the number one weapon in advertising? I think someone said that on Mad Men once at least anyway. I guess it isn’t the 60’s anymore though huh?

Anyway, in the advert, Pamela Anderson and her assistant are some hot businesswomen in some kind of board meeting for their company talking about some crap, when suddenly one of the ugly guys in the board meeting starts fantasising about the two of them in gold bikinis pouring cream all over themselves. It’s about a minute long so probably a bit gratuitous, but sex sells huh?

Then Pamela Anderson asks him something about URL’s and how they’re gonna get one and he blurts out CrazyDomains.com – I guess the idea being that it’s such an obvious answer that even if you’re fantasising about your boss being a lesbian it’s still on the tip of your tongue.

Check it out below and then there’s some exciting debate about it too:

The advert was originally cleared to run after 9pm in the UK by vetting company Clearcast who argued that Pamela Anderson was “a celebrity who was known for flaunting her body,” (LOL)  and that the women were portrayed as “attractive, dynamic and confident business people”. In contrast, the men were “nerdy and lacking confidence”, so the racy spot was “anything but degrading to women. Unfortunately after it aired ASA got 4 complaints of it being sexist  and degrading to women and having no relevance to the product and it got pulled. See ya!

At the risk of loads of haters calling us Sexist Chirpse instead of Sick Chirpse, I don’t really think this advert is that bad and kind of agree with Clearcast. I mean sure it is kind of sexy and the women squirting each other definitely has no relevance to a web domain names company AT ALL but the women are definitely hot and powerful and the guys are lame, ugly and nerdy and fantasising about them so if anything it’s empowering to women, despite the nudity and attempted sexyness? I dunno, maybe my views are a bit too Generation Y (Z? I lost track) but I wasn’t offended by it and didn’t feel like it was sexist or even that sexy really.

In any case, on the flipside of the argument you’ve really got to ask what the hell does a guy taking his top off and looking ripped and sexy have to do with Diet Coke? Sure, it’s not as graphic as this but that ad has been running for years and nobody has been complaining about it. And that isn’t even presented as a fantasy, it’s supposed to be reality. I’m not sure if that makes the whole sexism thing better or worse though within the context, you tell me.

So yeah, after saying that I’m ready for your best shot, so come on trolls hit me with it, can’t wait to see what you have to say about my inevitably perceived sexist POV. Knock yourself out.

It’s Not A Crime To Be An Asshole