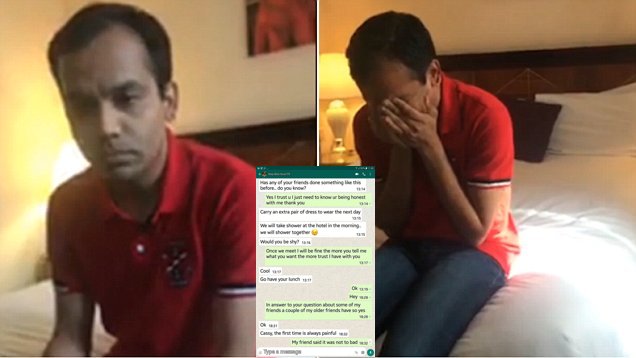 More and more people are being caught out by paedophile hunters as they attempt to have sex with underage girls and boys they meet on the internet, and the latest high profile ‘victim’ of these campaigns is 38-year-old high flying banker Balachandran Kavungalparambath.

The married father of one drove 100 miles in order to have sex with a 14-year-old girl that he had been chatting up on WhatsApp, only to be confronted by a paedophile hunting group in the hotel where he had agreed to meet her. He initially denies everything, but once all his messages are read back to him he realised he hasn’t got a leg to stand on and ends up bursting into tears and confessing everything.

Here’s some short ‘highlights’ of the Facebook Live Stream, but there is an hour long version out there too:

Kavungalparambath was today jailed at Birmingham Crown Court for 15 months after admitting to attempting to arrange or facilitate the commission of child sex abuse. He’s already lost his job and I imagine that his wife has left him too so his whole life has been completely destroyed by this footage. Serves the guy right too.

For more of the same, check out this guy getting caught trying to pick up young girls in Peppa Pig world. Disgusting.