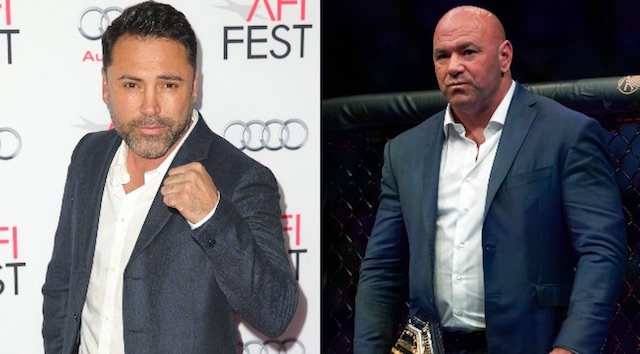 This would be too dumb.

Dana White is synonymous with the UFC after he built the promotion from the ground up, but I don’t think that anyone has ever actually seen him step into the ring for a fight himself and that’s why it’s so funny that boxing legend Oscar De La Hoya has decided to challenge him to a bout after White blocked a super fight between him and UFC GOAT Georges St Pierre.

GSP was legitimately excited about fighting De La Hoya in a boxing match but because it looked like it would be taking place under the banner of the Triller promotion, White decided to block it. He’s had beef with triller for a while now as a rival promotion and has repeatedly accused them of lying about how many PPV buys the Jake Paul V Ben Askren fight managed to accumulate.

Anyway, Georges St Pierre had the following reaction to the news:

Diplomatic. Oscar De La Hoya was way funnier though, taking to Twitter to say this:

.@danawhite Quit blocking@GeorgesStPierre’s chance to fight. How about we get into the ring first little B*#ch then after I kick your ass, I’ll fight a real man #DeLaHoyaGSP #LetGSPFight pic.twitter.com/sPKeXpHDDW

Tell them how you really feel Oscar. The President of Triller has offered to donate $250,000 to a charity of White’s choice if he allows the fight to happen, but I think I’m not alone in saying that right now I want to see Dana get off his fat old ass and step into the ring with De La Hoya and see the pair of them throw down. Could you imagine how stupid/funny that would be?

For more of the same, check out Dana White talking about his wild quest to catch a UFC pirate. Yeowch.