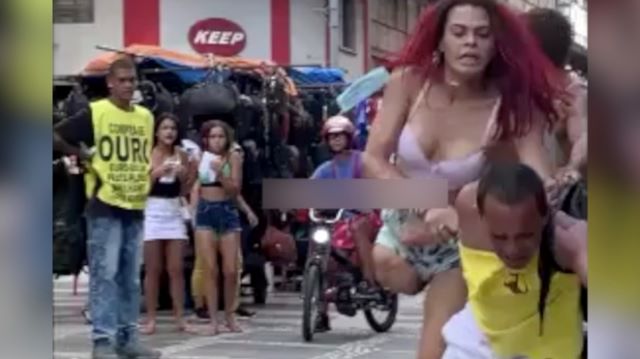 I don’t know what kind of situation you’d have to be in to raise the ire of a one-legged transwoman in the middle of the street in Brazil, but the man in this video has regrettably managed it and wound up catching a beatdown in the process.

Such a bruising ordeal in fact that he’s in tears throughout the whole clip:

Sweep the leg! Hasn’t this guy ever played Street Fighter or Mortal Kombat? If you’re catching a beatdown by a one-legged person, transgender or not, just sweep the leg and get the hell out of there.

I mean it’s an awful look for everyone involved regardless of who wins the fight, but when being physically dominated by a disabled transgender prostitute in the middle of the street you have to do something to stay in the game, and more often than not that’s going to involve taking advantage of their missing limb. Better than running off in tears with your shirt ripped off while the whole world watches, in any case.

For the guy with the prosthetic leg who tried to storm into a festival and failed miserably, click HERE.