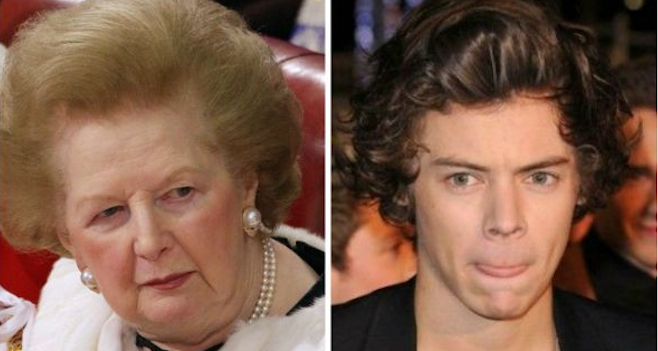 You would probably assume that One Direction fans – or Directioners – are stupid, uneducated and uncultured but this really proves it.

Predictably people are divided into a few camps – there are the people who are mostly northern who are absolutely loving it and tweeting stuff like ‘can’t believe that dumb bitch has finally copped it #party #best day ever,’ some people who are just respectful about it and have posted something like ‘R.I.P. Margaret Thatcher’ and the people that are probably the worst and the most attention seeking people who have decided to try and engage all their (internet) friends in some kind of political/social debate by posting a status like this: ‘Sorry, but I find celebrating the death of an elderly lady in ill health rather distasteful. If you didn’t agree with her policies, fine; celebrate that she is not PM now. No need to dance on her grave; she, like us all, was only human at the end of the day. Don’t mix business or politics with emotion, and don’t get personal. You hated her policies; you didn’t know her as a person.’ OMG SHUT UP ALREADY PLS U R V. BORING.

Aside from these groups of people you also get One Direction fans. As is usually the case when someone famous dies or something big happens, celebrities tend to say something about it via their Twitter account and give the little people some insight into their opinions on the matter. Today has been no different with a bunch of celebrities saying a bunch of crap about Margaret Thatcher on the internet, including Harry Styles who offered to send the following tweet which I guess expresses his condolences. Sensibly he tried to give his opinions on the matter to himself because he probably didn’t want to get trolled even more than he probably gets every day.

Of course, this led to unintended hilarity when all the One Direction fans had no idea who she was and tweeted him a bunch of dumb replies to it. It was killer and looking at it was definitely a welcome break from all the twatty comments and statuses that seemed to be bombarding my newsfeed all day. Check it out below and have a laugh.

I do realise that most Directioners are probably really young girls and might not even be English so might not actually know who Margaret Thatcher is for legitimate reasons, but The Iron Lady was a pretty big movie recently and it’s way easier to just Google her rather than tweet a legitimate superstar asking who she is because there is like a 0% chance that they might actually reply, so even if you’re not stupid for not knowing who Margaret Thatcher is then you’re definitely stupid in general for doing that.

And for the record I don’t really care about Margaret Thatcher dying, it’s great that it’s given us access to how stupid this is though. 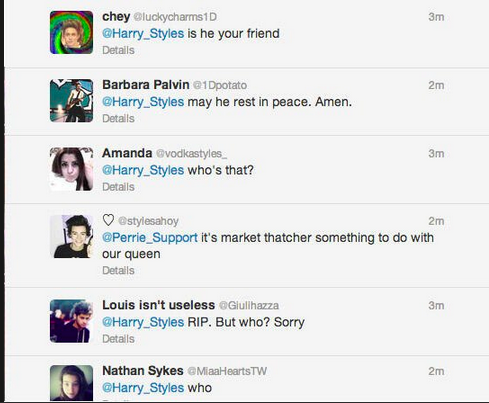