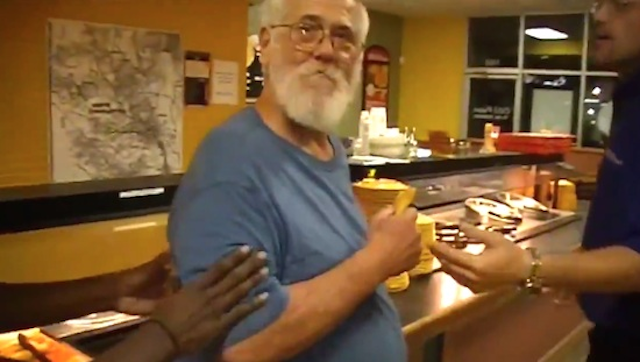 CiCi’s pizza is the best pie in town but this reaction is a little over the top.

I’m sure everyone can sympathise with the situation this old man finds himself in in this video, whereby he’s really hungry and he’s been waiting for his pizza for way too long. However, I doubt he was actually waiting two hours for his deep dish and I doubt that anyone has reacted like how he does in this video – it’s even more embarrassing than Nicklas Bendtner’s recent embarrassment in a pizza shop.

The  guy goes absolutely mark one psycho, running around the restaurant and pretty much acting like a little baby, shouting ‘I want my deep dish’ about 500 times and smashing a bunch of plates on the floor. I’m pretty sure that if I was that old I would know that that wasn’t the way to get myself the deep dish pizza that I so badly wanted – I’m pretty sure I know this at my age now to be honest – but that doesn’t stop this guy throwing a tantrum I haven’t really seen the likes of since I was a four year old kid.

Unsurprisingly he’s escorted out of the venue but his anger doesn’t stop there – he picks up a sign and tries to throw it through the door but fails. Loser.