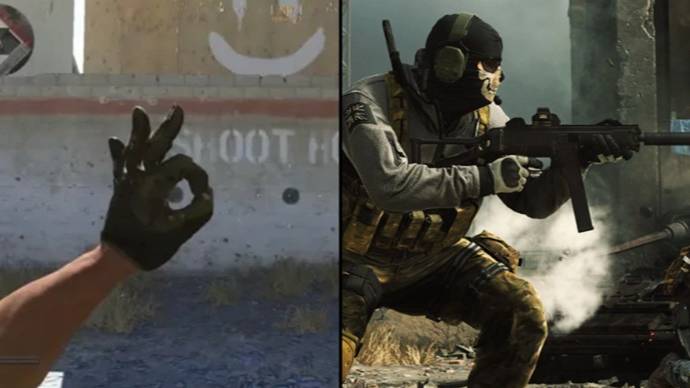 One of the weirder stories we’ve covered in the last couple of years is how the ‘Okay’ hand gesture has somehow been co-opted by the far right and whenever anyone uses it in a television show or similar they’re immediately called out about it, even though some of them clearly have no idea what’s going on with its new status.

It seems like this is a real problem though and people are taking it seriously as it’s been noticed that the gesture has been completely removed from both ‘Call Of Duty: Modern Warfare’ and ‘Call Of Duty: Warzone’ games. Activision or Infinity Ward themselves haven’t commented on the symbol’s removal, but EuroGamer posted the following blog about it:

It seems likely the gesture was pulled due to its status as a hate symbol.

The OK sign is no longer in the game, pulled on the quiet by Infinity Ward as part of Modern Warfare‘s mid-season update and replaced by a new gesture called ‘crush’.

There is no mention of the change in the official patch notes, but of course it didn’t take players long to spot the difference.

This isn’t the first time the video game industry has taken action over the OK sign.

Back in April 2019, Blizzard reportedly told a fan in the Overwatch League arena they were not allowed to use the OK sign after it was spotted on a stream and a complaint was made.

I mean I still find it kinda crazy that a symbol with a pretty much worldwide recognition has somehow been appropriated by Neo Nazis for their own nefarious reasons and it’s become such an issue that major video games have decided to get rid of it, but I guess the very fact that they’re taking this step means that it is a problem that needs to be addressed. Obviously people on the internet didn’t see it this way though and were only too quick to tweet their dismay about losing their precious little symbol:

Hey @CallofDuty is this 👍🏼 sign “OK” or racist aswell lmao

Why did you guy remove the ok sign, it doesn’t have anything to do with white power ok 4chan baited y’all so just add it back

In a video game series in which you can kill civilians, use nuclear weapons and commit legitimate war crimes, I would like to applaud @CallofDuty for removing the dreaded OK sign.

Honestly, I think it’s hilarious you got baited this hard in a glorious attempt to virtue signal.

What the hell is wrong with the people making #CallofDuty? Removing the “OK” sign? For fuck’s sake. QUIT LETTING THE PC SJW NUT JOBS SET THE AGENDA! Have some balls, for crissakes. There is absolutely NOTHING wrong with OK symbol. Pandering bullshit that disgraces real soldiers.

Always find it so funny how people get so angry about this kinda stuff? Yeah, I did start off this article saying I thought it was weird as well, but the fact is if it is being used by far right organisations then it unfortunately does need to stop being used in games and situations like these and this isn’t the fault of the game developers etc, it’s the fault of the organisations that have decided to co-opt its meaning. Never understand why people can’t get that and are always so mad about stuff like this. These guys are just trying to stop the spread of hate so chill out about it, yeah?

For more of the same, check out when this guy made the symbol during an election ‘Question Time’ special.  Controversial.