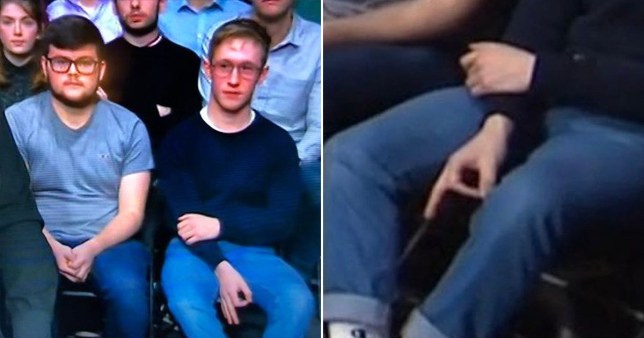 Back in 2017, some 4chan trolls started the theory that the hand symbol for ‘OK’ was actually a symbol of white supremacy and to throw it up meant that you support these ideas. It was an internet joke meant to test how gullible the media was, and it’s now clearly gone too far.

It just so happens that the same symbol is made when playing the Circle Game, where if an unsuspecting person looks at your hand while you’re making the OK sign below the waist, you get to give them a dead arm.

I think this is pretty clearly what the young lad on Question Time was going last night for when the camera panned over to him:

#bbcqt As the camera pans to the guy on the end,he makes the “White Power” sign, coincidence that Farage is on the show, think not. ⁦@bbcquestiontime⁩ what are you going to do about this? #JC4PM #Labour #racism pic.twitter.com/XYqxIk9ILa

@GailRenard have you seen the BBC question time picture with the guy in the audience giving the white power symbol, if not google it, it’s pretty sick, they’re obviously targeting right wingers for the audience

It absolutely should be.

So this audience member is either a Nazi, a scuba diver or is trying to amuse his himself and his friends by duping millions of viewers into playing the Circle Game.

Wouldn’t the most likely and logical scenario be the last one? I would think so unless you’re so wrapped up in the divisive political narratives of recent times where no one gets the benefit of the doubt and everyone is guilty of something.

Either way would be good to hear from the audience member on this. I mean imagine going on TV and trying to troll the world with a harmless joke only to wake up and find you’re being called a Nazi with dozens of people on Twitter calling for your arrest. Life sure comes at you fast.

Things are so bad that even Stephen Fry has been accused of white supremacy – also for doing the OK symbol. Madness.