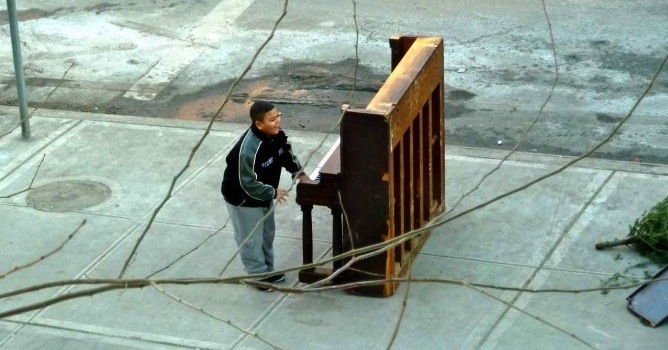 A journalist captures the story of one piano left alone on the cold streets of New York City.

Here’s a short documentary piece, of sorts, that kind of aims to go for your human side; you know the part of you that is supposed to feels way about things; and stuff; and junk — the most apt of the three here. I mean, I caught it on one of those built up hangovers that haven’t had a chance to kick in for days if not longer because you haven’t stopped and you don’t think you’re going to — but then you do, because there’s no money, and you’re alone, and you die inside. Suffice to say, I was a little fragile.

The video was filmed by a writer for The New York Times called Anthony Sherin; a resident of New York — No shit. He’d noticed that in New York there’s quite the tradition that when you’re finished with stuff you can’t get rid of easily, you just kick it to the fucking curb and leave it there; let the city and its streets deal with it.

â˜› Watch This Next : A Whole Pack Of Wolves Howling Together At A Wolf Sanctuary

One particular time though; It’s mid-December (last year to be precise, 2012 if you’re not sure) and outside his apartment he spots an old piano that has turned up, just like so much furniture before it kicked to the curb and left to the elements or passersby. He’s curious though, what does happen to these items? Especially something with the stature of a, little bit damaged but, wise, old piano — so he starts filming. This time it’s not so much the elements, or the city, or its streets that pay a vital role in the abandoned item’s story but the passersby, the people of New York — the people on its streets.

Take a few stills from your film, create a montage story and you’ve got a documentary.

For those who haven’t watched that video yet, please do — because spoilers. I’ll wait, and the rest who were well behaved to not cheat and read ahead. Done? Good.

That’s right, you just witnessed people murder a goddamn piano on the streets of New York in the plain sight of day, and passersby helped out — it’s sickening. I mean, sure it is just a piano and the way the video is made, with its melancholic piano backing designed to evoke emotion, is arranged to create a story and sentiment but it’s kind of strange. Throughout the video this piano just seems to be lighting up the day of everyone who comes by it, at least for a few fleeting moments in among their sad, miserable and ultimately insignificant, inconsequential and pointless lives.

â˜› Have A Look At These Next : Google Street View Visits Daiichi Nuclear Disaster Site

It’s just a piano, but it’s enough to stop people in their tracks, to have a nose, have a play around and smile. There’s even that couple are clearly smitten with it and want to take it home — to complete their home? Now that was a pretentious statement, but they comeback (I think) and they’re clearly gutted. I don’t know, just something to muse about really how something as inanimate as a grand piano, when left in the street can make a few days. UNTIL THOSE HEARTLESS BASTARDS KILLED IT IN ITS CURBLY HOME!

If you’re wondering why this post was filled with such sentimental drivel; let me tell you this — I write poetry.