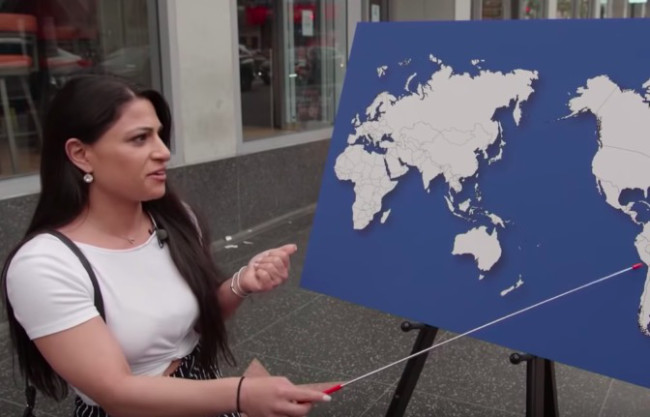 People often accuse younger generations of getting dumber and dumber and it’s videos like this that sadly seem to confirm it.

The video comes courtesy of that part of Jimmy Kimmel’s show where he goes out onto the street and asks people questions and only includes the people that gave the dumbest answer and it looks like he’s done it once again though. This one really does take the biscuit though as none of these people can even name one country on a map. Like not even where the USA is or even Canada or Australia or Mexico or the easy ones:

Completely dumbfounded. I’m not sure if maybe it was throwing them off because the map is the wrong way around to traditional maps, but even so you should be able to figure that out after looking at it for about one second.

At least that little kid at the end seems to be paying attention in school. Papa New Guinea is a tough one – I probably wouldn’t even have got that one myself you know? Seems like a prime candidate for the next President of the United States right there eh?

For more of the same, check out Jimmy trolling people over Obamacare a couple of years back. Never gets old this stuff.