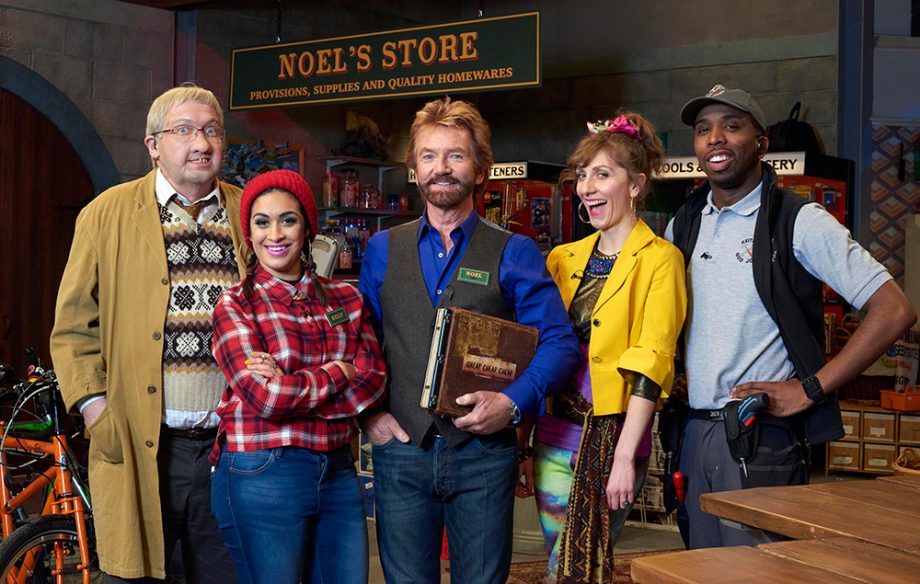 Say what you want about Noel Edmonds, you can’t deny that the guy has had some staying power. He’s been on our screen in one form or another for almost 30 years now, most notably turning ‘Deal Or No Deal’ – which is literally guessing what’s in a box – into one of the most popular and long running game shows of all time. No mean feat that.

‘Deal Or No Deal’ actually finished last year – sorry if you missed that, but I’m sure there’s a channel somewhere showing eternal repeats of it – and so Noel has moved onto his next venture ‘Cheap Cheap Cheap’. This is essentially a ‘Price Is Right’ kinda show where you have to guess the cheapest out of three items, but then it’s also so much more than that too.

For some reason, Noel is not only the presenter but also the owner of a bric a brac shop, which means that loads of random actors playing assistants and delivery men pop up every show to have weird interactions with him, which might be scripted jokes or might be improv, I’m not really sure. Either way, because there’s no studio audience or canned laughter and the jokes are absolutely terrible, it all becomes really awkward with only the pained groans of the contestants as a reaction to the awful banter.

I can’t actually find any clips of those scenes unfortunately, so you’ll have to deal (or no deal) with this trailer for the show below, which annoyingly doesn’t really capture just how frankly weird and crap it is:

Yeah I mean that just kinda looks like a standard quiz show except in a really strange setting with contestants sort of sitting like they’re in a school assembly or something.

Anyway, the ratings so far for ‘Cheap Cheap Cheap’ have been terrible, so if you want to check it out then you probably need to do so in the next couple of weeks before it’s gone forever. Every day at 3pm.

For more Noel Edmonds, check out what he was doing last year before this. I think the guy is officially off his rocker.