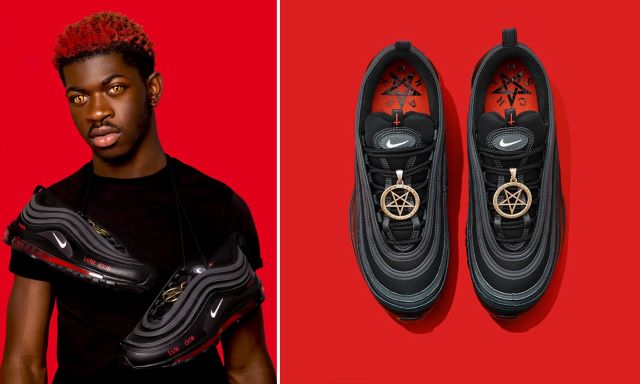 These Satan Shoes are causing quite the stir.

ICYMI, rapper Lil Nas X has sparked massive controversy after following up the release of his music video ‘Montero’ (in which he has gay sex with Satan) by releasing 666 limited edition pairs of ‘Satan Shoes’, each containing a drop of actual human blood.

Nike caught huge backlash over the product, which is kinda lame because they had absolutely nothing to do with it. Another brand called ‘MSCHF’ simply repurposed old Nike trainers to create the Satan Shoes and kept the Nike tick on it.

As such, Nike is now taking their asses to court:

Nike is suing MSCHF over the blood shoes: pic.twitter.com/inFLwU8k0q

Now clearly Nike has a case here as people are pissed at them over something they did not do. Essentially what happened is they sold a shoe, this other brand turned them into Satan Shoes, and people freaked out about it. BTW, the 666 pairs sold out in less than 60 seconds:

JUST IN: All 666 of Lil Nas X’s limited edition Satan shoes sold out in under a minute pic.twitter.com/PJv00vjaR5

However, where MSCHF has a case is one very important precedent – the fact they were also responsible for the $3000 ‘Jesus Shoes‘ containing holy water a few years back, which were also repurposed Nike shoes. Nike never had an issue with those, and there was never any lawsuit.

The Nike Air Max 97 her was revamped with a INRI “Jesus on the cross” piece, and the Sole filled with water from river Jordan and blessed by a priest. pic.twitter.com/S9oIcaWSmW

Of course there was nowhere near the same amount of backlash or publicity over the Jesus Shoes (and they weren’t marketed by one of the biggest music artists of 2021 either), but I’m pretty sure MSCHF can now say that they’ve released religion-based shoes in the past and Nike never stepped in, so they felt it was OK to just keep doing it? Obviously I’m no legal expert here, just thinking out loud.

In any case, it’s no surprise Nike want to distance themselves from all this now that this shit-storm has been kicked up. It has to suck that there’s thousands and thousands of people online tagging them and giving them grief over a product bearing their logo that they had nothing to do with. Think it’s fair to assume that MSCHF will get fully destroyed in court, but maybe that’s something Nike should have taken care of long ago.

For a look at the controversial music video for Lil Nas X’s ‘Montero’, click HERE.