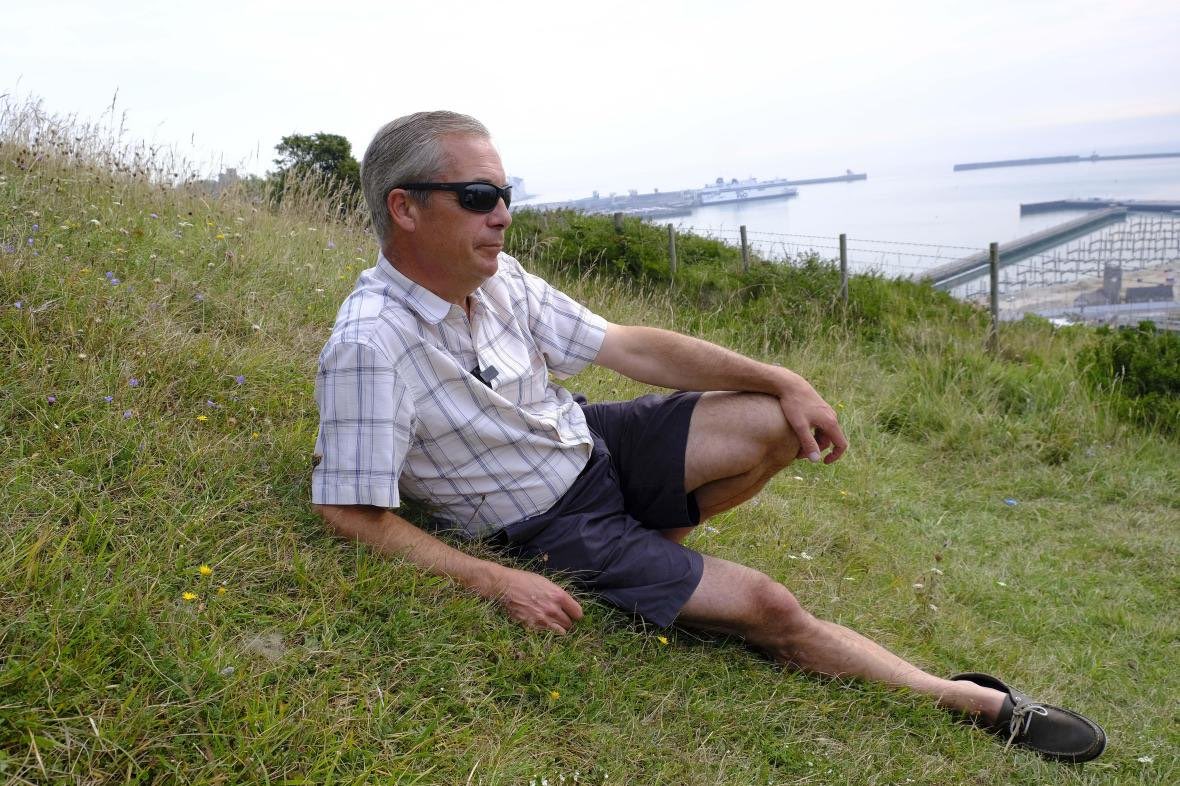 Brexit Party leader Nigel Farage has spent the last few weeks comparing migrants arriving in Kent after crossing the Channel to an ‘invasion’ – which seems a bit of a strong word when you see it’s like a dozen, soaking wet, unarmed people showing up in a dinghy.

Well anyway, it looks like Nigel decided to make a day of it and threw on some shades before chilling on the grass under the sunshine and waiting for those migrant boats to come in. This led to some absolutely ruthless comments about the size of Nigel Farage’s head and just his body in general – kickstarted by Guardian journalist Hannah Jane Parkinson.

i don’t mean to be rude, but why is nigel farage’s head five times the size of his body pic.twitter.com/0HQT2QDmwI

The hot air it’s filled with has made it swell.

I also can’t get over how skinny the leg

“Just make sure you don’t draw me like one of your foreign girls” pic.twitter.com/yokrNOmU0d

I don’t understand how a man 4 years younger than my husband looks so old. But then my husband does 100 press ups a day, has a boyish grin and isn’t a bigot.

“50 something seeks similar for long walks on the beach keeping Johnny foreigner away” pic.twitter.com/GRS8P7P4q9

Michelangelo’s The Creation of Arse pic.twitter.com/xcVyrKDWgc

That pose (and everything else about him) screams ‘ I’m a total bellend.’

Until the Renaissance (which was in 1957) artists did not know how to use perspective in their work. Thus, most surviving examples of boomer gammon sculpture are carved from raw blocks of lard in what to modern eyes is a crude and disproportionate way.

Sheesh… so mean! There’s no shortage of people rushing to Nigel Farage’s defence and pointing out it’s the angle/perspective of the camera that makes his head look too big for his body and also damning every body-shaming Tweet as nasty and hypocritical. And that about sums up the internet really – a) people that can’t take a joke and b) people who will break their own #bekind mantras if they perceive the subject as a categorically bad person.

That’s precisely what you intend to be, rude. Devoid of any clarity of thought or genuine line of attack you resort to prep school humour.

Honest question: is the Guardian recruiting bitchy little girls straight out of school these days? I’ve never expected a Woodward and Bernstein type of journalism from the Guardian but to sink to this level of playground stuff is probably why their readership is dwindling.

But I thought shaming people for their appearance was sexist?

Can’t we all just get along?

To watch Sky News conduct an absolute flop of an ‘interview’ with migrants arriving over the English Channel, click HERE.