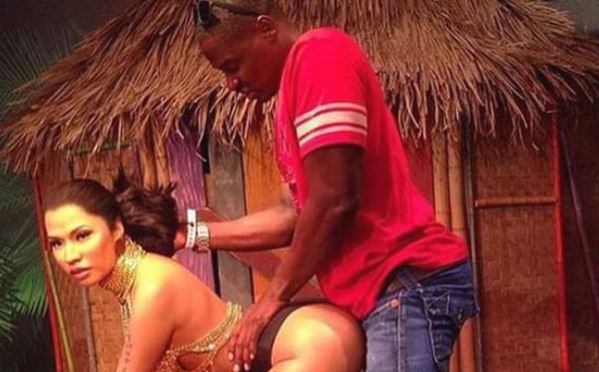 The new Nicki Minaj waxwork at Madame Tussauds is causing all kinds of problems.

Earlier this month, Madame Tussauds in Las Vegas revealed a wax statue of Nicki Minaj in the style of her ‘Anaconda’ video, and let’s just say people have been getting pretty hands on with it.

How about this guy though? Proper going for it:

Y'all really need to chill with this Nicki Minaj wax figure. pic.twitter.com/lfHE23WpLO

Are you allowed to do that? Quite sure you’re not even allowed to touch the statues at the London Madame Tussauds, or maybe at most you can put an arm around them or something. This guy’s proper pulling her hair and everything. Look at his face as well. I actually think that will bring in loads more visitors if they announce you’re allowed to basically have sex with the thing. But then maybe that’s pretty much what they’re saying here.

It’s just as well no one tried anything similar when that joker left 1,000 cardboard cutouts of Nicki Minaj’s ass outside a Finnish cathedral.