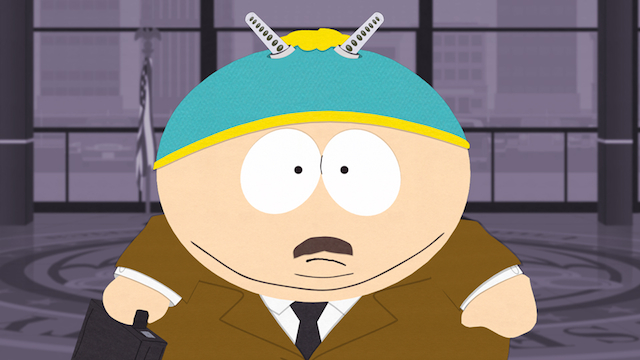 South Park is back tonight after a one year hiatus for the start of its 17th season, in an episode which sees Cartman infiltrate the NSA.

Unbelievably, South Park has been on a year’s hiatus but it’s set to return to our screens tonight with a new episode on Comedy Central at 10pm. Incredibly, it’s the show’s 17th season and it shows no signs of letting up with its biting social commentary on current affairs.

Tonight’s episode is entitled ‘Let Go, Let Gov’ and it involves Cartman infiltrating the NSA. Once inside, he doesn’t like what’s recorded in his personal file and so he decides to let the whole world know what’s going on through a new social networking app championed by Alex Baldwin called Shitter. It allows the thoughts of the person to be broadcast straight onto the internet. I’m sure we can all see where this is heading – hilarious consequences, which is normally the case with South Park.

Here’s a couple of clips from tonight’s episode which feature Cartman and Alec Baldwin talking about Shitter. The Alec Baldwin clip is especially good because you know that guy has completely crazy thoughts given some of the stuff he used to come out with on his Twitter and in his personal life.