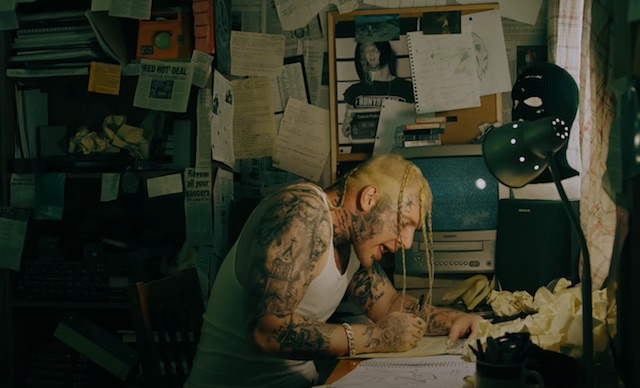 I’ll be the first person out there to admit that NFTs seem like a complete and utter waste of money, but this rapper called Tom McDonald buying an Eminem NFT for $100,000 seems like it was actually a pretty worthwhile decision for once. Kinda.

Eminem started selling a whole bunch of NFTs during Shady Con in April and one of these was the instrumental track to ‘Stan’s Revenge’, a follow up to his 2000 mega hit ‘Stan’. McDonald picked this up for a cool $100K and then decided to record his own ode to Eminem and Stan himself entitled ‘Dear Slim’.

He also went to great lengths to dress as Stan/Devon Sawa did in the original video and also spent a week recreating his bedroom, as well as picking up the exact same car that Stan was driving in the original video from a junkyard. And it seems to have paid off because at the time of writing the song has 5 million views on YouTube and was number 9 on the music trending chart.

Here’s the video below as well as McDonald’s thoughts on it all:

We broke our backs recreating Stan’s room for “Dear Slim”. A week of thrift-shopping trying to find the perfect decor. Hours taping all the articles and pictures to the walls…and we built the whole set in my spare bedroom. It was worth it though.

The car in “Dear Slim” is the same one Stan drove off the bridge. Bought it from a junk yard, sanded/painted it. Got seaweed from the beach & covered the exterior. Filled it with water so its constantly leaking…like it was pulled from the bottom of the river where Stan left it. pic.twitter.com/LSRowjSqMS

4.6 Million views in 4 days ALMOST makes rapping underwater worth it 🤣 IT SUCKED. Covered my pool w/ black fabric & shot for 3hrs at 2 AM. Tied weights around my waste so I could sink. Put a light on a stand IN THE POOL. You owe me a share.

Dear Slim was probably the most expensive & creative Thank You in Hip-Hop history.

I cant even pretend to give a fuck if you don’t like it…I’m not humble enough to downplay how dope it was…and I’m not too cool to acknowledge the man who inspired me. Suck it.

People can keep hating all they want. Fact is…ANYONE would jump at the opportunity to rap on an Eminem beat…and 99% will NEVER even have the opportunity.

I actually think that’s pretty cool, although the song is a bit weird how McDonald is basically rapping about how he was obsessed with Eminem and has now become him. I’m also not wholly convinced that he even needed to release thing song to become more famous as another one of this songs on YouTube already has 15 million views, but I suppose if you’re already that rich and big time and you have $100,000 spare and really want to rap over an Eminem beat, then why not? Maybe he could have just reached out to Eminem’s management for a collab though as he already seems to have a bit of clout in the rap game?

Anyway, I hadn’t heard of McDonald before this and I’m sure there are a whole bunch of people out there in the same boat, so I guess it was worth it in that respect. To be fair, it’s the only worthwhile use I’ve seen of an NFT so far, so he’s got that going in his favour too.

For more of the same, check out Cara Delevingne selling her vagina as an NFT. Is that going to be worth investing in?