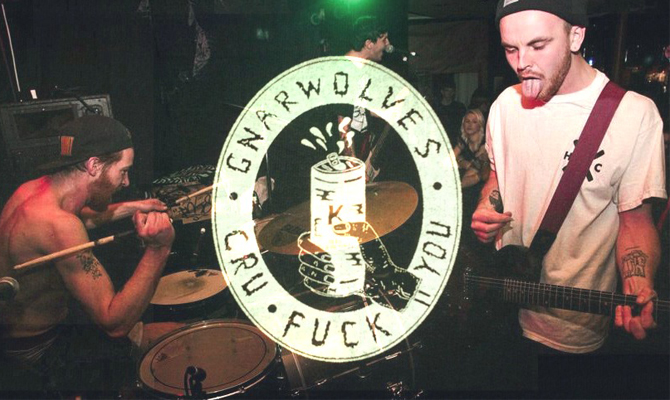 Gnarwolves are set to release a new EP next month, and we got the chance to hear it first….

A while ago we did an interview with the lads from Gnarwolves, one of the UK’s hardest working punk bands right now, and hailed by many as “proof that pop punk isn’t dead”

Well the other day we were lucky enough to get our hands on their new record a month before its official release on the 17th June via Tangle Talk Records.

The track ‘Limerence’ has been doing the rounds on various music magazine websites and as usual is kicking up quite the frenzy, check it out here….

We can now happily report that the record is worth the hype. It’s as no holds barred as everything that has come before, but with the same thoughtful tone throughout.

The opening track ‘Melody Has Big Plans’ roars in with signature howls and the familiar sound of cracking skateboards, it’s everything we’ve come to expect from the band and more, with signature Gnar breakdowns and gang vocals a plenty it’s a firm introduction to a rip roaring record.

The follow up, ‘Tongue Surfer’ is a track begging for audience participation. Gnarwolves’ gigs have become synonymous with a ridiculous amount of crowd surfing, and Tongue Surfer is another track that demands just that along with a screaming sing a long chorus that’ll leave audiences straining to find their voices days later. We managed to catch the lads play in Brighton and they ended up getting thrown out and banned from the venue for causing too much of a riot. It was great.

‘Limerence’ is the rest bite of the record, it’s the sort of track that brings round that “Saviours of Pop Punk” moniker. For those that never completely let go of the punk music that they grew up with like our fellow Chirpser Will, it’s the song that takes you back and reminds you how emotive and fun music should be……

But before you get too sentimental the final track of the EP comes banging in, “High On A Wire” is the brash end to another spot on release from Thom, Charlie and Max. It’s reflective, but forceful in delivery and with building crescendos it leaves you wanting more, but never unsatisfied, just enough to keep you wondering what they are going to do next.

Gnarwolves have a great skill of producing records that you can’t help but want to see live, their energy is consistent and enthralling, and a decent back catalogue has awarded them with a loyal following. No doubt when this record is released the audience will know every word by their very first gig.

They’ve just finished touring with The Story So Far, but as usual they have more gigs lined up: