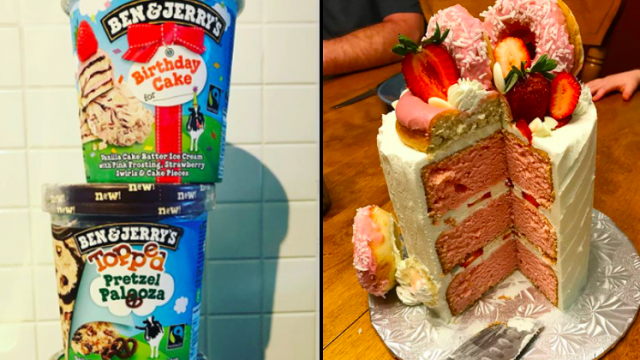 When it comes to ice cream, you don’t really need to look much further than Ben And Jerry’s for the best stuff out there. There are just so many amazing flavours and they keep on getting better and better with every new release.

Case in point – this awesome new birthday cake flavour ice cream. As we all know, birthday cake is one of the nicest foods out there and so the thought of combining it for an ice cream flavour has me positively frothing.

And it looks like it’s going to live up to expectations too, if this review from New Foods UK says:

So my expectations was really high for this, because it sounds amazing!! And guess what? It was!! The cake pieces are incredible, and the frosting swirl is so tasty! As for the ice cream, it really has a nice flavour to it! It’s just so tasty, overall it’s one of my favourite Ben and Jerry’s yet!!… 9/10

Damn. I think I’ve gotta go out and get this immediately, especially as it’s also on sale right now and will only set you back £4. Nice.

There’s also another new flavour out called Pretzel Palooza that you can see above, although I don’t think I’m as excited about that one as I am about the Birthday Cake one. Still need to mention it though in case some weirdo out there thinks that it’s going to be better. It’s not.

For more Ben & Jerry’s, check out their new vegan flavours as well. Nicely.