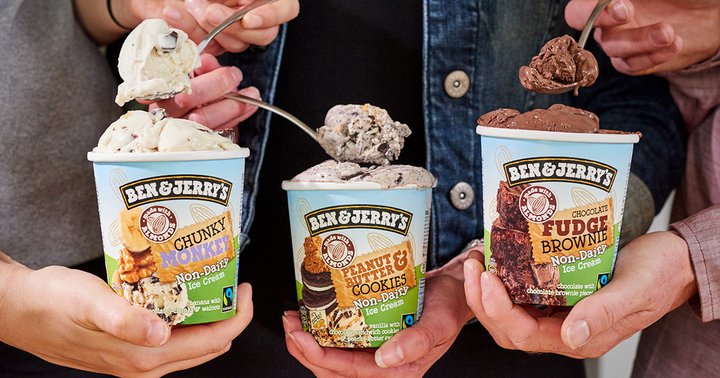 You have to give up a whole bunch of stuff when you become vegan – the list is practically endless, with cheese, eggs and all kinds of meat ranking pretty highly up there – but the number one worst thing you have to give up has to be ice cream. It’s just so good and so upsetting that you have to ditch it. It can literally make any situation better.

Of course, there are a bunch of non-dairy vegan substitutes, but they never taste as good and they haven’t exactly ever had the completely sick flavours that you can obtain when you’re non vegan. Until now that is.

A while ago Ben & Jerry’s revealed that they were looking into bringing some of their vegan ice cream flavours into the UK, and they’ve finally pulled their fingers out and done it, stating that these tubs should be available in most supermarkets over here by the end of the month.

To start with you’ve got the choice of Chunky Monkey, Chocolate Fudge Brownie and Peanut Butter and Cookies:

OK, so they’re not my favourite flavours – where the heck is Phish Food or Chocolate Chip Cookie Dough – but I suppose those ones are a bit more difficult to create fully vegan equivalents. Ben & Jerry seem like they’re on it though, so it shouldn’t be too long until the range expands. Maybe in 60 years we’ll all be eating vegan ice cream exclusively, who knows?

For more vegan stuff, check out the fact that even McDonald’s releasing a vegan burger. Mmmmm.