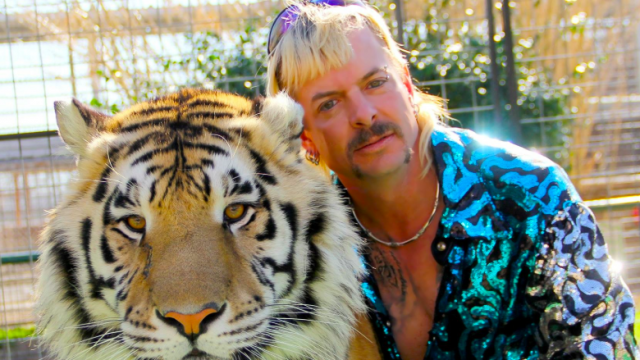 ‘The wildest story you’ll never believe’ – the producer of the Fyre Festival documentary.

We posted a few weeks ago about how former Louis Theroux guest and self professed Tiger King Joe Exotic had been sentenced to 22 years in jail after he hired a hitman to murder a rival and what a wild story it was – and it seems like the guys over at Netflix had already picked up on the potential in this story one of their notorious documentaries.

‘Tiger King’  is produced by the guys that made the Fyre Festival documentary and will seek to tell us all about the wild life of the man who was christened Joseph Maldonado-Passage but decided to crown himself as The Tiger King later in his life. Joe Exotic ran a roadside zoo in Oklahoma and was well known for his crazy mullet and flamboyant personality, but that doesn’t necessarily mean that he was well liked by everyone.

This is how he came into conflict with Carole Baskin, founder of the Big Cat Rescue Wildlife Sanctuary. She criticised Joe for  mass-breeding tigers, separating cubs from their mothers, and then using them as photo props and a bitted feud erupted between them, that would ultimately end in the bizarre murder plot that will form the subject of the documentary.

Here’s the official announcement, as well as the Netflix blurb:

From the executive producer of FYRE: The Greatest Party That Never Happened comes #TigerKing, a new docuseries about Joe Exotic — a gun-toting polygamist who presides over an Oklahoma animal park — and the murder-for-hire plot that led to his arrest pic.twitter.com/QKGMMz822z

A rivalry between big cat eccentrics takes a dark turn when Joe Exotic, a controversial animal park boss, is caught in a murder-for-hire plot in this limited docuseries where the only thing more dangerous than a big cat is its owner.

I mean this does sound like it could be up there with ‘Don’t F*ck With Cats’ and the Fyre Festival documentary in terms of how popular and awesome it’s going to be, doesn’t it? And we’ve only got about a month to wait for it which is a crazy turnaround for Netflix considering how recently the verdict was recorded. Gonna be a good one.

For more of the same, here’s Joe Exotic’s appearance on Louis Theroux from back in the day. What a character.