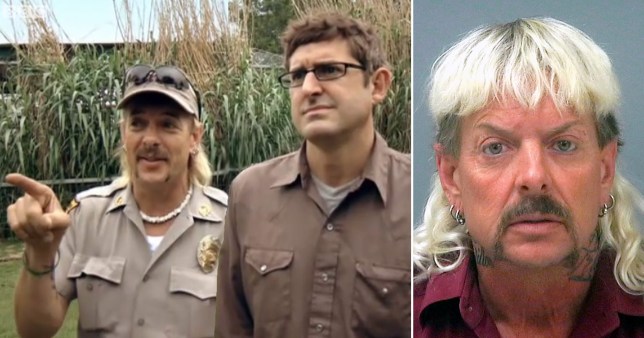 This has another documentary written all over it.

Louis Theroux has pretty much made his name on interviewing complete and utter weirdoes and it’s not that rare that people he’s met go on to do really bizarre and depraved stuff – Jimmy Saville anyone? – but this guy ‘Exotic Joe’ probably deserves a whole nother documentary about him given the crazy shit he’s just been sent to jail for.

Louis met ‘Exotic Joe’ back in 2011 for his documentary series ‘Dangerous Pets’, as he travelled to Joe’s ‘roadside zoo’ in Oklahoma to question him about his big cat breeding. You can see a clip from the show below:

Quite the character hey! ‘Exotic Joe’ developed a cult following due to his stupid style, larger than life personality and online videos detailing the animals in his zoo, but as with any online superstar this also brought a whole load of hate as well.

One of Joe’s biggest critics was Floridian Carole Baskin, the CEO of a Tampa animal sanctuary called Big Cat Rescue. She was a frequent detractor of Joe and the methods he used within his animal park, arguing that the animals weren’t being looked after properly through his techniques. She also secured a multi million pound settlement against him after she sued him for changing the name of his park to ‘Baskin’s Big Cat Rescue’.

Being an Oklahoma hick with a name like ‘Exotic Joe’, there was obviously only one way he was going to solve this problem: hire a hitman. Unfortunately for Joe, he accidentally spoke to an undercover FBI agent, who he offered $3000 plus expenses to head from Oklahoma down to Florida to kill Baskin. ‘A whole lot more’ was promised on completion of the deed.

Obviously the FBI agent dobbed him in and now Joe has been found guilty of conspiring to murder someone and he’s now heading to jail for 22 years. I guess you can’t deny that he’s had a colourful life at least.

Louis confirmed the news via his Twitter account. Sadly he didn’t confirm whether or not he would be making another documentary about the guy though.

Seeing quite a few tweets about this. Yes, he’s the guy we featured in our doc America’s Most Dangerous Pets. https://t.co/Xv3GERm41v https://t.co/8i7w0Vjeys