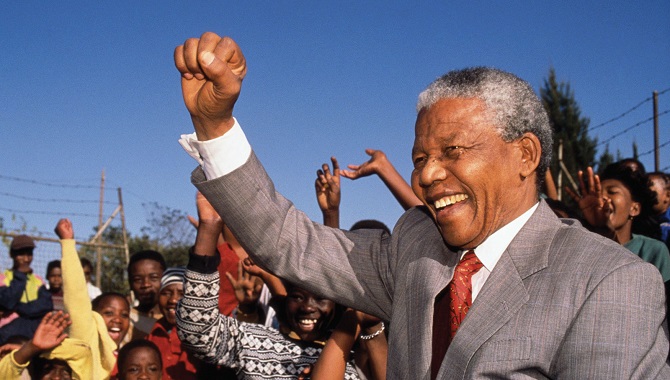 This week, the trailer has been released for the upcoming movie depicting Nelson Mandela’s life. Mandela: Long Walk To Freedom will be based on Mandela’s 1994 biography, and will be released in January of next year. With this, and Mandela’s ailing condition, it’s reasonable to predict that we will soon be awash in a sea of tributes to the man. You may not know much about him, if this is the case I would urge you to read as much as you can. As he is undoubtedly one of the most important figures of the 20th century.

In a nutshell (as crude as it is to describe such a man) Mandela was among the leaders of the fight against Apartheid in South Africa. He played a prominent role within the African National Congress (ANC), a revolutionary political party whose aim was to overthrow the white supremecist National party and end its policy of racial segregation (Apartheid). He was jailed for 27 years for his part in the struggle. While imprisoned, the leaders of the ANC chose him as the worldwide focus of their agenda, beginning the ‘Free Nelson Mandela’ campaign. Fans of The Specials, or of alternative 80’s comedy should be well aware of this campaign, as it is referenced many times by left-wing sympathisers throughout the decade.

Mandela was freed in 1990 as a reaction to the worldwide pressure being placed on the government of South Africa. He was also awarded the Nobel peace prize in 1993. And, in 1994, in the first democratic elections held in South Africa, Mandela became president. There are those who argue that Mandela’s efforts all boil down to the superficial. But what cannot be argued is that he knows the power of the charismatic leader. He has used his international  renown to tackle a variety of issues, he has been a leading figure in the fight for human rights, democracy and AIDs awareness and treatment. Unfortunately there is no way to avoid that Mandela hasn’t a great deal of time left on this planet, and the upcoming biopic will create a wave of discussion and public exaltation (and possibly vilification) over his life and contributions. We must keep a few things in mind before we are swept away with what will undoubtedly be an emotional time in the world news.

Firstly, there is a tendency to look at the past wistfully. To view the struggle of the ANC through rose tinted glasses. To allow our chests to swell with the emotion of it all. The reality is far more horrific. From the early 60’s onwards the ANC fought a violent campaign to achieve it’s end, and Mandela served as the leader of it’s military wing, the ‘Spear of the Nation’. Almost all revolutions are paid for in blood, and this is no exception. Whether their actions are justified is another debate entirely, but it is important to remember that this was a violent conflict, with deaths on both sides. Many members of the ANC have been accused of corruption throughout it’s history, and there is no way of pretending that all of South Africa’s problems are over.

Secondly, We will see a huge showing of political hypocrisy. It will not be long before David Cameron makes a statement extolling the virtues of Nelson Mandela, either upon his death or the release of the film. He will make no mention of the fact that the leaders of the Tory party considered Mandela a terrorist, and that Cameron himself was rumored to be a member of the Federation of Conservative Students, which produced ‘Hang Nelson Mandela’ posters and badges. While Cameron’s membership can be disputed, the membership of many of the smug faces you see sat behind him in parliament cannot. Nor can the fact that, in 1989, the young Cameron visited South Africa in a ‘fact-finding’ mission which was funded by the regime who imprisoned Mandela. Cameron was wined and dined by the very same people imposing apartheid.

In short, we should all urge each other to think, and not accept everything as it is presented to us.