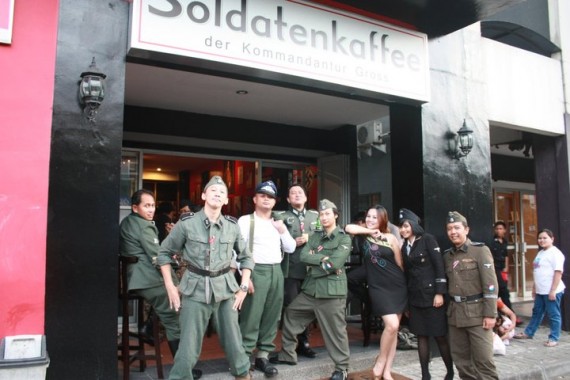 The owner of a cafÃ© in Indonesia is in serious need of a history lesson.

Indonesia is made up of thousands of tropical islands and it would be fair to say it’s one of the most beautiful places on the face of the planet. It’s not surprising then that 2012 saw more than eight million tourist descend upon this tropical paradise like a plague of sun burnt locusts, with an unquenchable thirst for overly extravagant cocktails and white sandy beaches.

That’s not to say that the usual tourist traps are to everyone’s taste. For those who would sooner eat a dolphin than swim with one, there is an establishment more befitting people with a slightly warped view of the world. In the city of Bandung there is a cafÃ© where it’ll always be 1941 and the schnapps will never run dry. Soldaten Kaffee prides itself on making every night Nazi night. Their staff all dress in SS and Wermacht uniforms, keeping with the cafÃ©s unusual choice of decoration. The wall you would usually expect to contain oddities such as a rubber singing fish or a collection of unusual road signs in your typical themed bar is clad with Nazi memorabilia, including a huge swastika flag and portrait of old Adolf himself. There are photos on their Facebook (which you can have a look at for yourself here) of their regulars turning up in their favourite war time outfits complete with replica guns for a fun filled night of xenophobia.

Not the best first impression I’ll admit but remember, you should never judge a book by its cover. According to their website, Soldaten Kaffee is not pro-Nazi in the slightest and is simply misunderstood. The cafÃ©’s Nazi theme is intended to ‘explore’ Hitler and the Nazis as a pop-culture theme and by no means a political statement. Personally I’m not sure that Nazis and pop-culture really mix but then who am I to judge. When interviewed about his peculiar choice of decor, Henry Mulyana, the cafÃ©s owner, defended his establishment telling reporters: “Controversy will always exist, depending on from what side we’re looking. The way I see it, the Nazis didn’t commit slaughter. War is crime, so there will always be acts of murder in a war”. Oh dear, Henry.

It seems that Soldaten Kaffee pretty much went under the local governments radar until an English language newspaper wrote a story on it, sparking outcry from Indonesians and foreigners alike on Facebook and Twitter. This in turn prompted the local government in Bandung to start asking questions, primarily, ‘why are you decorating your cafÃ© with symbols internationally understood to be associated with right-wing, racist, fuck-whits?’. I don’t really see what the point is of sitting Mulyana down to talk out the pros and cons of a Nazi themed cafÃ©. If they were going to close it, surely they would have just done it without asking him what his opinion on the matter is? Whether it is meant to be a pop-culture statement or not doesn’t detract from the fact it’s a cafÃ© in a tourist area full of Nazi memorabilia. Surely from a purely economic point of view, anything that would scare away tourists is generally bad for business? The people handling the fallout from this in Bandung are either clueless or closet racists.

As of now Soldatten is still open but with all the pressure it’s under from the press it’s only a matter of time before something gives. I’m sure you’re all eagerly scouring trip advisor for the next flight out to Indonesia before this fine establishment is lost forever.

Finally, anyone planning a wedding in Bandung in the not so distant future might be interested in the range of wedding cakes they also have on offer. Say what you like about neo-Nazis, these lot know how to bake.