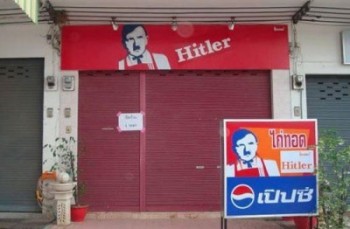 Yes, you read the title correctly, there is a fried chicken establishment named “Hitler”. It is in Bangkok, Thailand, a country that is apparently obsessed with “Nazi-chic”. We had a fascination with Pokemon, they have a fascination over one of the most evil men that’s ever lived, in the end we’re basically the same. This obsession has seen an influx in Hitler related apparel meaning it is not uncommon to see a group of teenagers wearing a t-shirt with a cartoon image of the Nazi leader.

The image of the restaurant went viral not so long back, with people finding humour in the image of the fascist dictator selling chicken based goods. It seems there’s one place that doesn’t think this is funny; everyone’s other favourite proprietor of fried chicken:KFC.  They have apparently threatened legal action against Hitler Chicken whose logo looks like the lovechild of Hitler and Colonel Sanders, complete with bow tie, white suit and apron. There’s no proof that this is not based on the actual lovechild of the couple.

When asked by the Daily Mail, Alan Robertson who lives in Bangkok (5 guesses why) described the chicken as “very good” and when he asked the server why they decided to have the fascist dictator as their logo, he was told “the owners had thought it was a good image”.

KFC have described the sign as “extremely distasteful”, which may be the first time KFC have actually been concerned about taste.