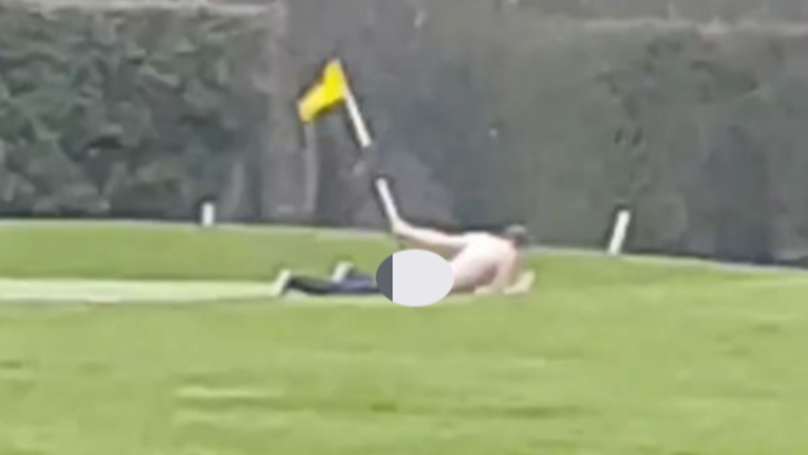 Does anyone love golf as much as this man?

Normally the most exciting thing you’re going to see during a golf game is a very skilful golf shot and maybe if you’re lucky someone streaking every now and again, but I don’t think that what’s being featured in this article has ever been seen before on the golf course.

The clip comes courtesy of some golfers who were visiting Brackenwood Golf Course in Bebington, Merseyside over the Easter weekend who were shocked by what they came upon as they headed onto the ninth hole. You can check out the video below but be warned that it can only really be described as a naked man shoving the golf flag up his ass and having sex with it whilst also filming it. If you don’t want to watch that, then I would suggest skipping the video below:

Yeah, that’s really something else huh? Not sure why the guy was doing it but it kinda looks like he was getting a massive kick out of it which is probably why he was filming it? Whatever turns you on I suppose.

Steven Gayton filmed the incident and tried to shed some light on what was going on:

He was on his own and it looked like he was doing it for a kick and filming himself doing it.

It’s the weirdest thing I’ve ever had the misfortune to see.

I don’t think he was drunk because he was filming himself. There was only me and three other friends on the course.

I think he thought he was all alone and when he realised we had spotted him he was not bothered. Scary to think that there are a lot of kids around that area.

Very strange. Who knows what goes through people’s heads. That’s definitely a game of golf I will never forget.

Yeah I doubt anyone is going to forget it either, given the way that the video has gone viral now. It really is something that you don’t see every day.

For more golf course happenings, check out the greatest mini golf hole in one of all time. Serious skills.