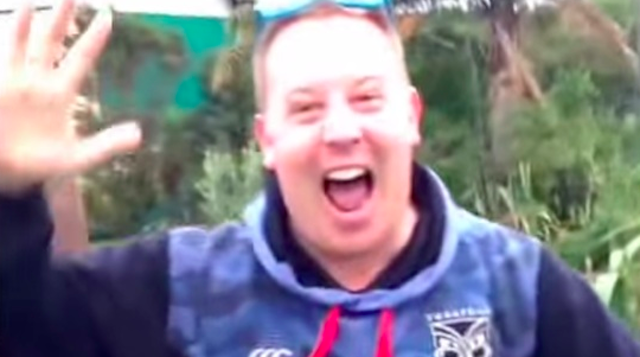 This guy looks like a bit of a chump sure but he hits a pretty unbelievable mini golf shot.

I’m pretty dope when it comes to mini golf but even I’ve got to admit that this shot is pretty unbelievable, even if it is pretty lucky too.

It’s from a Pirate’s Cove mini golf course over in New Zealand, and the dude taking the shot (who admittedly looks like a bit of a chubby knob and can’t high five properly) whacks it so it lands in a stream going through the course which I’m pretty sure you’re not supposed to do but even so it floats down it and goes straight into the hole. One in a million shot, at least judging by their celebrations. Except for the fact that neither of them know how to high five.

A lot of haters have been saying that it’s really easy to do this on Pirate’s Cove golf courses because they deliberately create the flow of the stream so that if you hit it in the stream it’s a guaranteed hole in one, but that sounds a little far fetched to me and also I can’t see it being guaranteed either. In any case, nobody else has uploaded a shot like this onto the internet yet to my knowledge so these guys win. It isn’t as cool as this awesome golf trick shot though.