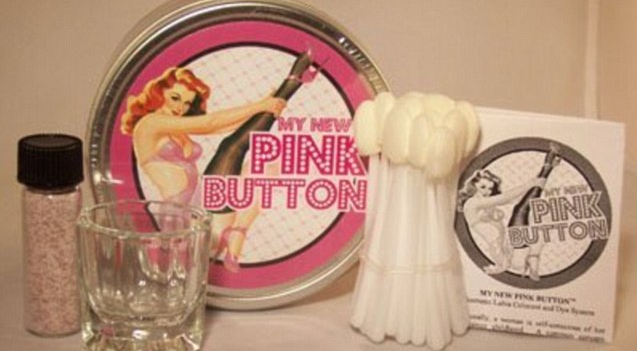 My New Pink Button is a new product that enables women to dye their greying ‘lady parts’ a more pinkish colour, but some people aren’t happy about it.

I wasn’t really aware this was a problem, but apparently it is as the recent success of Amazon’s new product ‘My New Pink Button’ seems to prove.

Firstly, ‘My New Pink Button’ has to be one of the most cringeworthy names for a product in history, and also kind of offensive, but despite this it has shifted off the shelves of the Amazon warehouse fairly promptly with three of its four varieties currently sold out.

I thought at first that it was a dye that would dye a woman’s greying pubes – which kind of makes sense – but it turns out that this ISN’T actually what it does but it instead dyes a woman’s greying labia and is ‘able to restore it to a youthful pink’. I probably should have figured that out from the name though right? But seriously, is this actually a problem? I haven’t heard of this being an issue before but I guess I’m not a girl and girls wouldn’t talk about these things with me. If it is actually a problem  though can you let us know in the comments?

The dye itself comes in four different varieties which are cutely named after four different girl’s names – Ginger, Marilyn, Audrey and Bettie, and also comes in ultra cutesy 50’s style packaging, which I’m sure is just exactly what you would want when ordering a product like this. The four colours represent how pink your labia can get with the dye, with Marilyn being the lightest and Audrey being the darkest.

â˜› More Dye: Kid Has Allergic Reaction To Dye, Gradually Turns Into Sloth From The Goonies 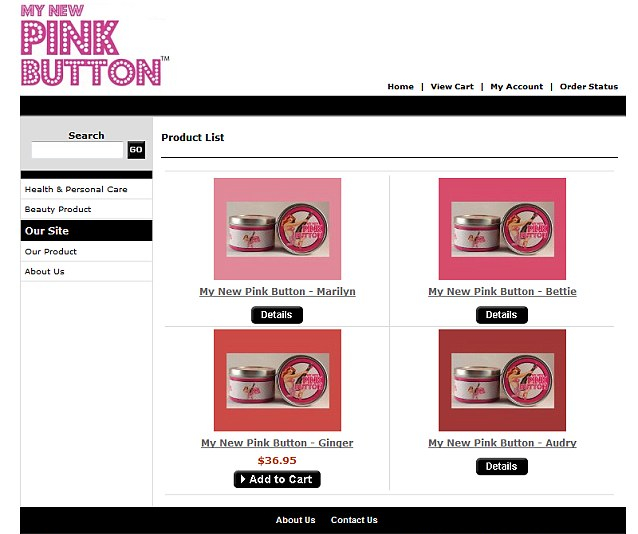 Each shade has a horrible pitch line accompanying it such as the two you can find below:

Audrey: ‘For the woman who wants to be daring, this is a bold burgundy pink colour. Perfect for everyone, and your own base colour will determine the depth of this shade. Tonight it’s Show time!!’

Bettie: ”Think of that favourite lipstick you wear for those dressy black tie affairs and think “Bettie”. This shade blends with a woman’s own skin tones to bring out that “sexy hot pink, I am fired up, look”. Go dancing this weekend and remember to bring “Bettie” along!’

Ewww, seriously? I guess on some level it’s working though, as shown by their sales.

Apparently the product got dreamed up by a Paramedical Esthetician called Karen Mari after she discovered her own genital colour loss, and after research into how to avoid it discovered that thousands of women were suffering from the same problem. After finding no solution and consulting with her gynaecologist, she decided to create her own and developed My Pink Red Button. I still can’t get over typing that.

Every kit comes with instructions, 20 disposable applicators, a mixing dish (which kind of looks like it could double up for a shot glass) and the labia colourant. I guess that means it’s good for 20 uses. I’m not sure how long the dye lasts but it probably depends what you get up to with it, if you know what I mean.

It’s not just me that finds this whole product upsetting/weird as there are quite a few negative and sarcastic reviews that you can find on the Amazon website, screenshots of which I’ve included below. I kind of agree with them for once – as I’m not exactly known for my feminist standpoint on issues – but I don’t really feel like the slight discolouration of your labia is a huge problem, or one that I’ve even thought about before. I mean everyone’s different right, who cares? Everyone gets old and most of the time when you’re gonna have sex the light is probably going to be off anyway. And even if it’s on it’s no big deal. The whole deal just seems kind of unnecessary to me.

Despite this, Amazon has sold out of almost all of it so I guess there must be some demand for it. All you female SC readers out there, let me know what you think. 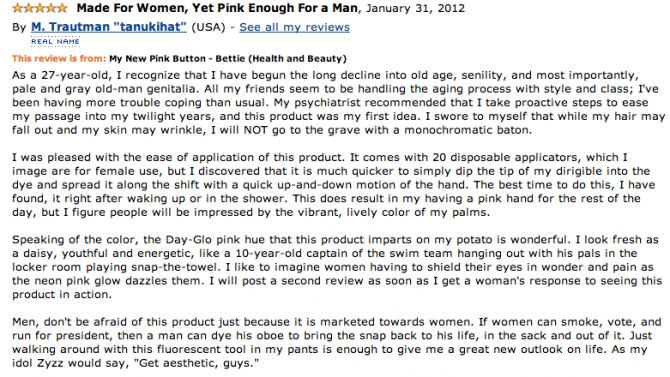 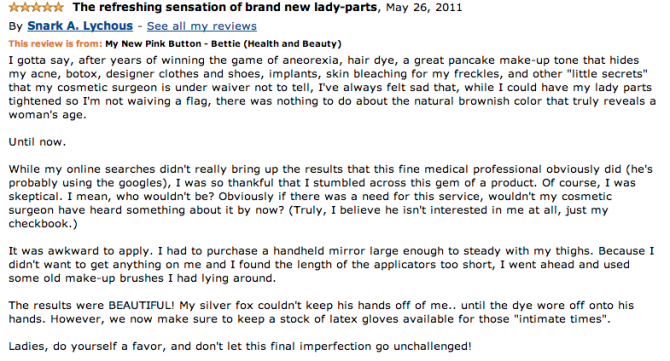