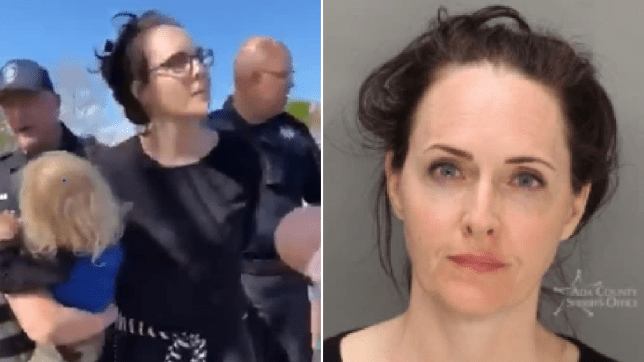 There are angry protests over her arrest in this video.

Despite all the information we have on coronavirus and all the problems it’s already caused us, there are still some people out there who are so dumb they still don’t realise what’s going on.

You’d think this mum over in Meridian, Idaho, would understand the danger that gathering loads of people in a public place causes right now, but apparently not. She and all her mum friends give this policeman a hard time and in the end, she tries to be some kind of anti-social distancing martyr and gets herself arrested:

Great example for the kids there. Make a scene, argue with the officer who didn’t even make up the rule, and get arrested. It gets worse too:

Good morning. As some of y’all pointed out, this shit gets cornier.

– She’s an anti-vax nut who regularly holds gatherings at parks.
– They probly *were* trying to stage a scene, at the expense of their kids.
– There’s a mastermind behind it all who showed up at the cop’s place pic.twitter.com/IJeGKBHvPe

There’s actually protests going on about this in Idaho right now, like this idiot shouldn’t have just gone home and stayed there like the rest of us are so we can try and beat this thing ASAP. Notice no one in the video is even wearing a mask?

Arguably we’re not much better over here. Did you see Westminster Bridge again yesterday? Sigh…