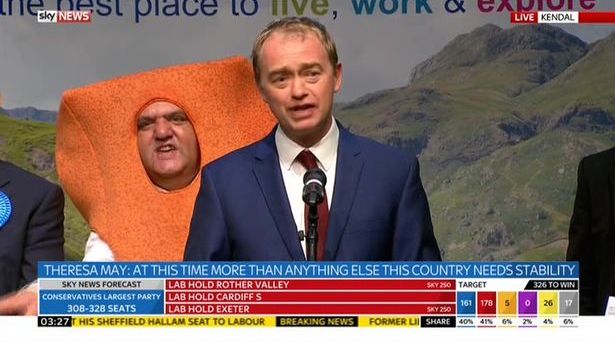 Earlier this year, news emerged stating that a fish finger would be taking on Liberal Democrats leader Tim Farron in the running for his seat in Westmorland and Lonsdale.

Well, it turns out that this was completely true, and Mr. Fish Finger rocked up in all his golden breadcrumbed glory.

Although Tim Farron held onto his seat with a majority of 777, he was massively upstaged by his rival Mr. Fish Finger, who stood proudly and boldly behind Farron as he delivered his victory speech:

I love how Farron tries to pass it off as a “great exercise in democracy” like it’s no big deal that he’s literally stood with a giant fish finger behind him. That’s just so quintessentially British, talking around the awkwardness of the situation in order to avoid confrontation. Classic election moment right there.