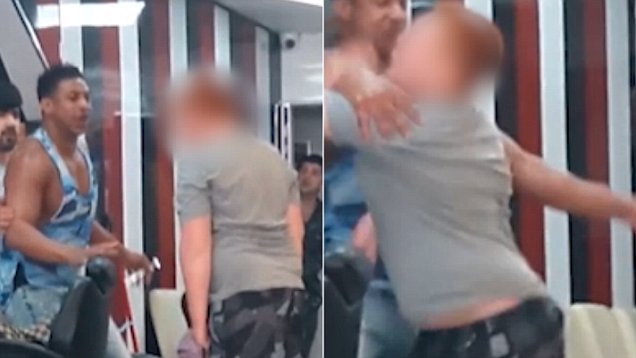 How many times have you been to the barbers and received a crappy haircut, but you’ve just grinned and bared it because you can’t really be bothered with the rigmarole or asking him to change it or explaining how he’s done a bad job? Yeah, pretty much every time right?

When you’re a snotty little kid from Doncaster, you can actually do something about it though as the video below can teach us. The little brat wasn’t happy with his haircut – although I’m not really sure what could have been done differently as it looks like he just got a buzz cut – and decided to go on a mad expletive filled rant before punching the barber in the face and daring him to meet him outside! Touchy:

Guy in the hairdressers just butchered some poor kid, the kid nearly knocked him out!!!!This content is exclusively managed by UNILAD to license or use this content please contact licensing@unilad.co.uk

Jesus. Never knew that barbers had it so hard in their line of work.

Also I know he’s only a little kid but couldn’t he have done something during the haircut if he thought it was going to end up so awful. Like I’m fairly certain he wasn’t going to have his eyes closed during it, so why not be mouthy during it when you can actually make a change rather than afterwards where you’re just going to go viral on the internet for being a stupid little idiot? Just an idea for the future.

Afterwards apparently the kid started taking out on his mum as well, according to Dave Smithson, the guy who took the video to begin with:

He came back in with his mum, holding his head like he had been injured. His mum kicked off at first but then when the hairdresser explained she sat the lad down.

He was saying to his mum ‘are you going to f*cking walk into town and get me a hat then?’

The mum said ‘if you carry on talking to me like that you’ll get nothing!!’

It was the lad’s fault. He wanted short back and sides but ended up leaving looking like a dry roasted peanut.

The hairdressers shaved it all down to a grade one but you could still see the patch and he was told to go back in a couple of weeks after it had grown back.

I mean that was nice of them to ask him to come back when he was being so obnoxious, I probably would have banned him for life if it was me. Guess things work differently up in the north though.

For more of the same, check out this woman calling the police after she receives a bad haircut. Idiot.