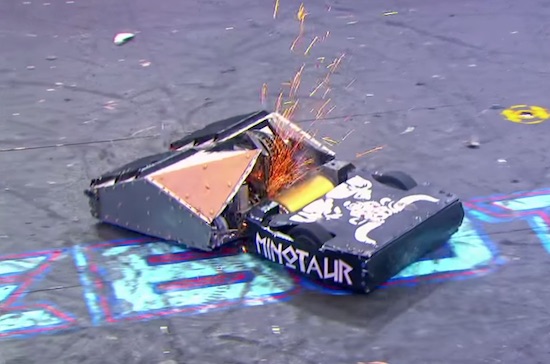 ‘Robot Wars’ has sadly been off our screens for way too long now, but it looks as though the states have been getting their fix of robots battling each other for years in a show called ‘BattleBots’.

‘BattleBots’ has just featured the fight that they’re calling ‘the best in their history’ when a robot called Minotaur took on another one named Blacksmith. This battle really does have it all – flying hammers, sparks flying, flips, robots getting torn apart and the loser even getting set on fire. Brutal.

That was some exciting shit eh? I spent the first 30 seconds of the fight wondering what the hell Minotaur’s offence was going to be, but when it finally started firing I knew I was wrong to underestimate him just for being small and looking way less tough than Blacksmith. Respect to him for eventually coming out on top in an absolutely sick robot fight.

Loved watching the intense looks on the nerds who were controlling the robot’s faces too. That’s some serious dedication.

Check out what the robots are going to look like on the new series of ‘Robot Wars’. I’ll give you a clue – they’re seriously badass.