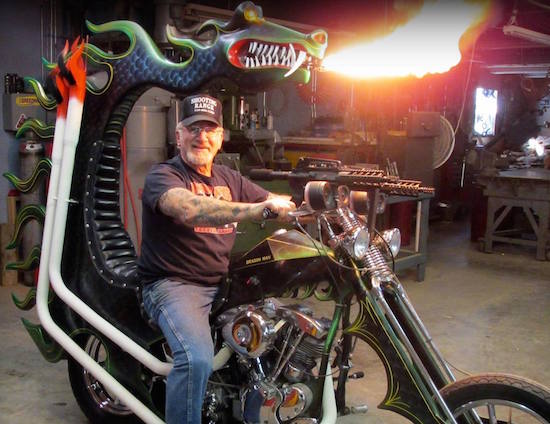 Well he certainly looks the part.

We often joke about just how easy it is to get a gun in America, but the right to bear arms is a big deal over there and nobody has exercised it more than this guy Mel Bernstein AKA Dragonman.

Bernstein (I’m not calling him fucking Dragonman, what am I, two years old?) has the highly desirable title of ‘Most Armed Man In America’. He runs a rifle range, weapons store and military museum in Colorado Springs, and despite having so many guns, seems like a pretty nice guy. Here’s a short documentary about his life:

Well, whatever turns you on I suppose. I collect comic books and people think that’s weird. I suppose that’s not that different to collecting loads of different guns and then customising your motorcycle to make it look like a fire breathing dragon with two guns holstered on the front? Is it?