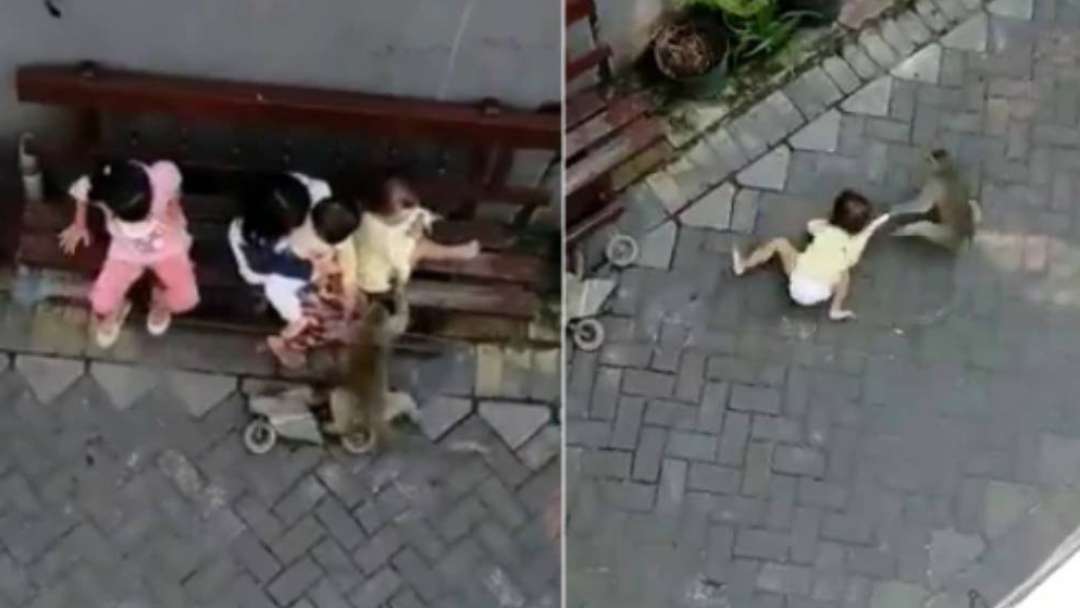 The coronavirus pandemic has been tough on everyone, not least the monkey population of south-east Asia, who were filmed last month engaging in a monkey gang war on the streets of Bangkok after the lack of tourists meant they weren’t being fed.

There’s similar problems in nearby Indonesia, where a video thought to have been filmed in Tanjungsari Village shows a monkey riding a bike pulling up on a group of people (already crazy enough), and then attempt to kidnap a little girl:

Holy shit! Question is did that monkey attempt to kidnap the little girl by his own accord, or did someone put him up to it? I mean he didn’t learn to ride that bike on his own, did he? Probably learnt during his time in the circus and is now using his advanced monkey skills to thrive in a life of crime. Well maybe not “thrive” since the girl got away, but it was a close one for sure.

What’s really crazy is that nobody in the video seemed too shocked by what was happening? Maybe this is a regular occurrence after all and not a result of monkeys struggling during the pandemic.

OK so what really happens is those monkeys get put on a toy bike (that doesn’t have an engine) and a collar with a rope on it.

The owner then yanks the cord so the monkey flies from one end of the street to the other while steering.

Pretty cruel and that’s probably why the monkey is so strung out. You can see the owner trying to pull back on the cord and he pulls the monkey while it hangs on to the kid, and in the start yanking the cord to propel the bike.

Indeed, upon closer inspection, there’s a rope attached to that monkey that’s dragging him away as he’s got the girl in his grips. Sad and terrifying on multiple levels. Let’s hope that kid isn’t mentally scarred for life either.

For an amazing video of a fed-up monkey sharpening a rock and using it to smash through its zoo enclosure window, click HERE.