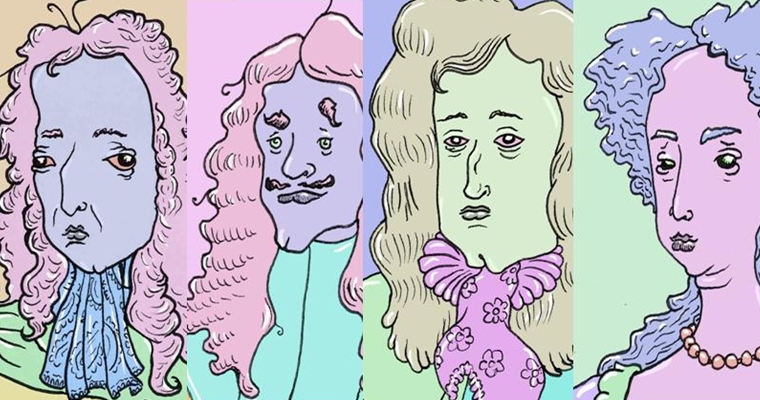 Here’s part three of our trawl through the monarchy from present to past. Today our shonky history bus drives past Dutch invasions and smallpox. 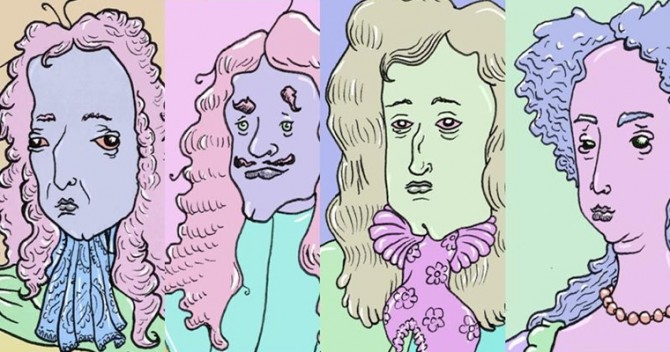 Welcome back to section III of me blathering on about Kings and Queens. The eagle eyed amongst you may have noticed that the title has changed slightly from monarchs of Britain, to monarchs of England, well done eagle eyes. This is because we’re travelling backwards in time and the people we have already covered reigned after the merging of England and Scotland to form a new country in 1707. So lets get on with it shall we, but before we start if you haven’t done your homework, read these first:

Today’s drivel is being paired with some more than adequate pieces of art by one of the newest members of the Chirpse brigade:  Jack West-Oram at Ichi Nichi Drawings, he has lent us his time to make sure our learning experience is as painless as humanly possible. So big up Ichi Nichi Drawings here. As ever, please remember I know nothing about history, I am simply summarising deets for mouthful sized ease. OK? 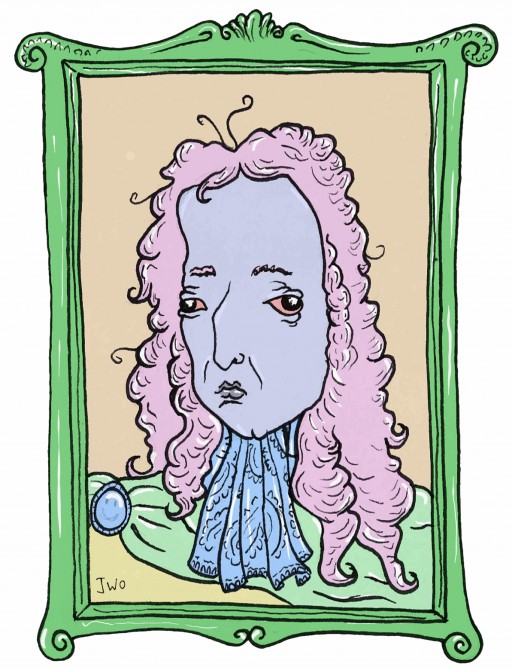 This chap was also known as William the Orange because he absolutely loved Terry’s chocolate oranges. Jokes. He was called that because he was a Prince of the Dutch House of Orange-Nissau who were a big deal in Holland and Europe at that time. He is the first King on this wander backwards through history that took the throne violently. He had to invade England and batter the shit out of King James II & VII to win the crowns of England, Scotland and Ireland. His father died of smallpox days before he was born so he was a Prince from birth. His mother died of smallpox when he was ten. He married his London born first cousin, Mary. She was almost 6ft tall and physically fit but still went on to die of smallpox too. 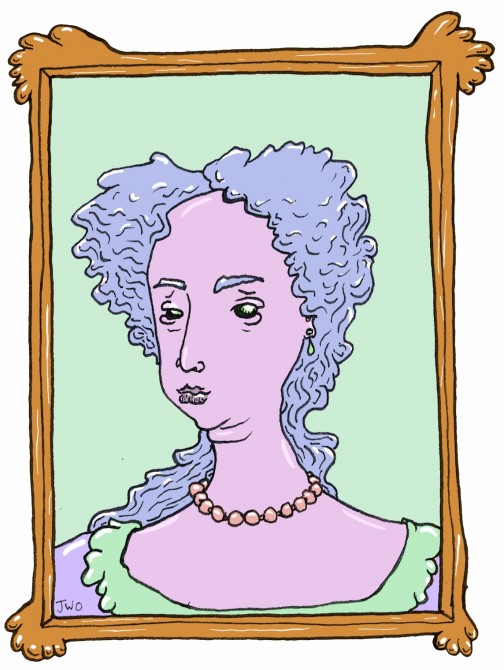 They never had kids, and he managed to only have one affair which was pretty good for a royal of that time. He was always very anti-French and thought that the French King Louis wanted to take over the whole world. So he spent a lot of time joining up with other countries to bully the frogs. William wanted James, the current King of England to join him in spitting on the Frenchies, but he wouldn’t and from then on their relationship soured.

William decided to invade England but knew the English might not be too welcoming to a foreign power. To smooth his passage he asked leading protestants to invite him to invade. The protestants were up for deposing the Catholic King and so the “Immortal Seven” obliged and invited him over for a ruckus. William landed on our soils and, almost immediately, protestants in the English army defected to the Dutch. James knew he was screwed and legged it but was caught by some fishermen, his second attempt succeeded and he made it to France leaving William to take over the throne. William’s wife actually had more claim to the throne than him, so they plumped for a joint reign after a lot of legal wrangling.

There were many who never recognised their legitimacy and William spent many months of each year out of the country fighting with other powers. Mary was in charge during his time away but would give the reigns back to William on his returns. His popularity slowly got even rockier when people started claiming he was a homosexual and spreading rumours about some of his closer male consorts. In 1702 whilst riding, his horse put a foot on a mole hill, the King fell and broke his collar bone and later died from associated pneumonia. Some were said to toast “the little gentleman in the black velvet waistcoat”.

â˜› Read Next: Fake Nostalgia Is Stupid And Annoying 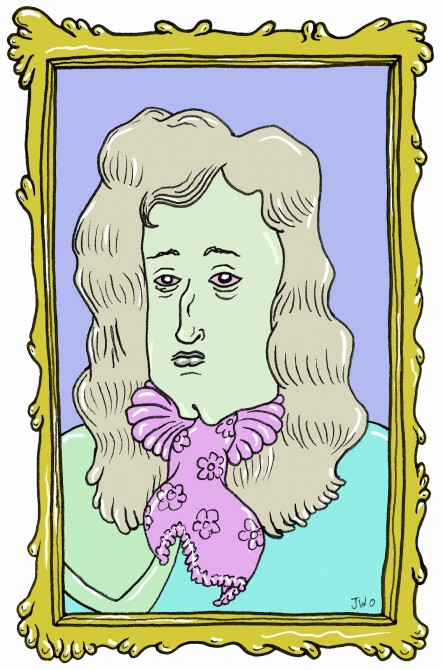 James II was a pro-Catholic, pro-French megalomaniac, who basically thought he was divine which of course made him politically unpopular. These bad vibes culminated in protestants welcoming the invasion described above. He married a pauper – Anne Hyde – secretly which was another unpopular move, they had eight kids but only two survived beyond infancy. He was a doting father and close to his kids which was a step away from the norm in monarch’s families of the time. He had loads of mistresses, including one of Winston Churchill’s relatives and the Countess of Dorchester, and was reported to be  “the most unguarded ogler of his time.” Anne died of breast cancer in 1671, by 1673 James, now 40 years old, had remarried the Italian princess Mary of Modena who was 15. Jeez. In his career he faced rebellions, one of which was partly run by his illegitimate son the Duke of Monmouth who failed and was excecuted along with about 250 others in the Tower of London. William of Orange eventually forced his exile to France and he died there a decade or so later from a brain haemorrhage. 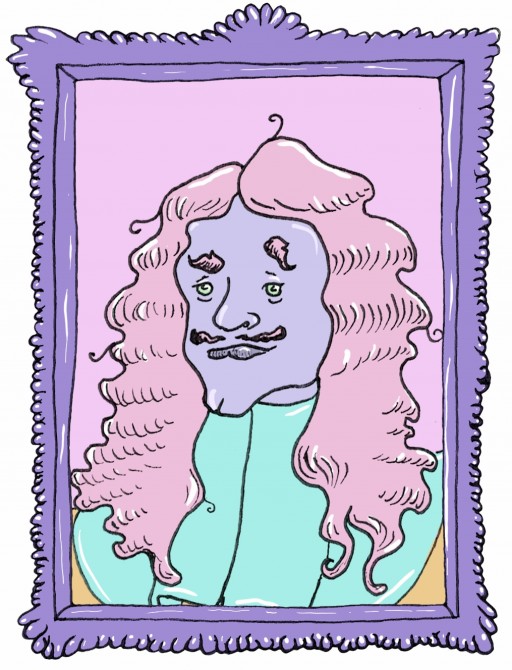 Charles II was James’ brother, he came to power after the Cromwell dynasty (more on that next time) who had decapitated his father, dissolved the monarchy and given the peoples of England a pretty shitty time under military rule. So as a backlash the people were chuffed when the throne was finally restored, it was relief all round. He was known as the Merry Monarch, partly due to the liveliness of his court, but also due to his hedonism. Modern historians describe him as a lovable rogue. He married Catherine of Braganza but they didn’t manage to have kids. He did, however, manage to produce a total of twelve little bastards through seven mistresses. During the civil war he was a child and lived in exile in the Isles of Scilly, Jersey and finally France where his Mum was already hiding out. He became King of Scotland and tried to smash up Cromwell but they were overpowered and the country basically sat under military rule. Charles managed to get back to France and hide again. Eventually Cromwell’s cronies were brought to their knees and Charles was reinstated as King. He was in power during the Great Plague of London and the Great Fire of London, him and his brother both actively helped in the fire fighting effort. He died suddenly of an apoplectic fit in 1685 which caused many to believe he was poisoned, but now with the powers of medical science we reckon it was actually a problem with his kidneys. He had no legitimate kids, but Diana Princess of Wales was actually directly descended from him via two branches of her family tree, so William is likely to be the first British monarch descended from Charles II. So there.

Thanks for coming along with me. See you next time for #4.