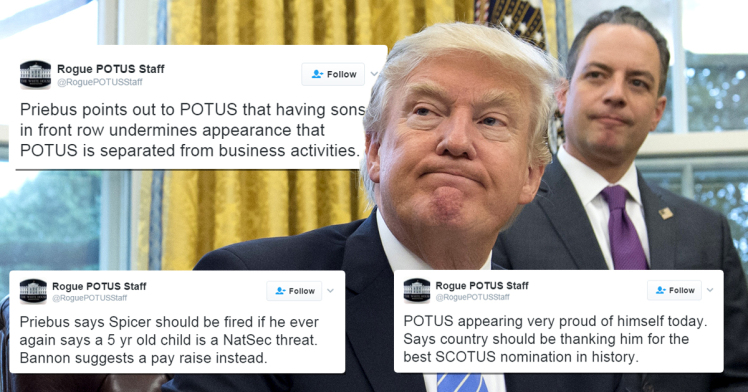 A group of rogue staff claim to be tweeting undercover secrets and updates from inside the Donald Trump administration White House.

The unverified account, called ‘Rogue POTUS Staff’, has gone viral and has already gained a lot of attention with its supposed insights into what’s going on with the new government.

The group describes itself as, “the unofficial resistance team inside the White House,” but so far whoever is behind it has refused to provide proof of ID. Which is fair enough really – if this is legit, then whoever is running this is going to be in deep shit for leaking government secrets.

Here are some of the allegations they’ve tweeted so far:

Assessment is that a post Brexit PM May needs POTUS more than POTUS needs her. "She does what we want, or we go somewhere else."

Priebus says Spicer should be fired if he ever again says a 5 yr old child is a NatSec threat. Bannon suggests a pay raise instead.

POTUS fully overwhelmed after full week on the job. Things spilling over into out of office lives for everyone.

POTUS wants GOP to give $$ to #Calexit . Bannon urges to openly endorse as state's rights issue, but privately to shift elect. college red.

Pres. Trump is already making waves at the office. Wants to be "the President who will be remembered as a King." His words, not ours.

Very interesting. If it is true then who the hell is it? They’ve obviously got to have a whole string of people working from inside the White House. Some people are speculating that it has been created by right-wingers with an aim to dupe liberals into believing what they hear. Whatever the truth is, the account now has more than half a million people following them, so they’re definitely making waves. Give them a follow if you want to see what ‘secrets’ come out next.

Maybe they’ll get to the bottom of the whole Donald Trump Photoshopping his hands saga.