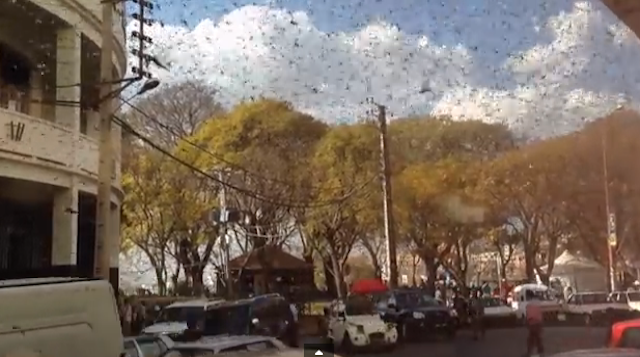 Armageddon is upon us.

Even if you’re not religious, you will have heard the Biblical stories about plagues of locusts reigning down on some town, and probably discounted it as being biblical nonsense (although not as ridiculous as any of these Bible stories) and thought that it would probably never happen in real life because it was so unrealistic.

Well, that’s where you would be wrong because the exact same thing happened in the African town of Antananarivo – the capital city of Madagascar – last week, although it probably wasn’t the work of a vengeful God though. Locusts have been a problem in Madagascar for the last couple of years in the cities as they’re drawn to urban environments thanks to their heat waves.

The plague of locusts was so serious that it stopped traffic and forced many people indoors, as well as impairing a lot of peoples’ vision. Check out a video of the chaos below: