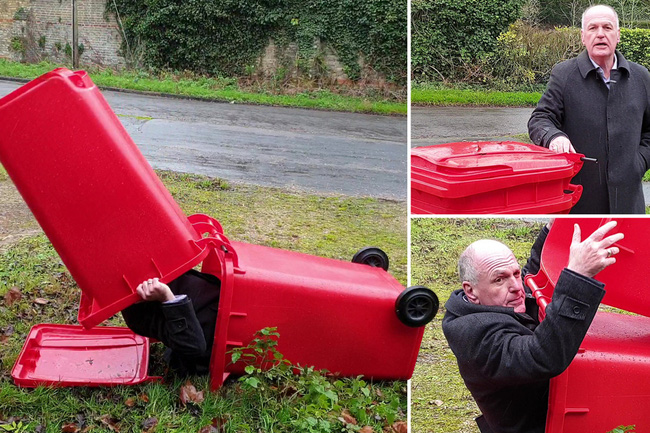 Why didn’t I think of that?

A British multi-millionaire believes he has come up with the perfect solution to the UK’s homelessness crisis – by tying two wheelie bins together.

Peter Dawe, 65, of Ely, Cambridgeshire, says he has created a unique ‘sleep pod’ which he insists is the answer to keeping rough sleepers dry at night.

The idea is to bolt two bins together and create small air holes in them at a cost of £100, which will make the homeless experience more ‘comfortable’. Here he is showing off his genius contraption:

Brilliant. Just brilliant. I mean only a tech multi-millionaire could come up with something so ingenious to help combat the UK’s homeless problem. I mean it’s definitely a step up from cardboard boxes, right? Gotta give him that much at least.

Unfortunately for David, his idea is struggling to take off because homeless charities and people on social media say it’s ‘demeaning’ and want nothing to do with it. I’m not too sure how you could sort out two bins for every homeless person either which would probably just result in homeless people emptying out people’s bins and stealing them so they can get a dry night’s sleep. I mean they’d probably prefer to spend the £100 it costs to make this contraption on food TBH, or maybe a few nights’ stay in a hostel or something. Anything other than spending it on two big plastic bins. Also imagine what would happen if they slept in too late on bin days? Disaster waiting to happen.

Still, at least Peter Dawe is trying to figure out a solution. No one should be living in the streets and so it’s good to have people with lots of money trying to come up with ideas. Suggesting homeless people should sleep in bins was a sure-fire way to get everyone mad at him though. Back to the drawing board.

For the homeless man who threw a huge bucket of hot diarrhea all over a woman’s face, click HERE. No coming back from that one.