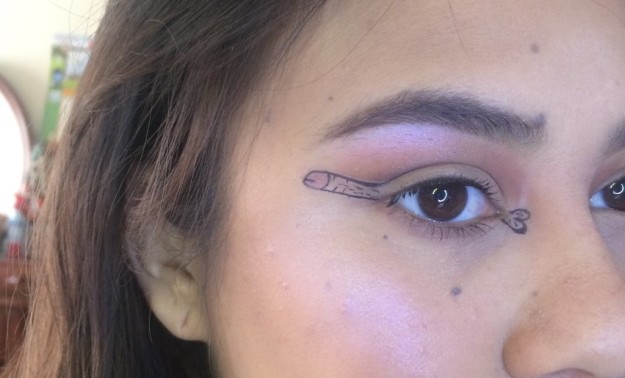 This must be a joke.

The mannequin challenge is dying down so the internet needed something else stupid for its latest viral craze and it’s decided to come up with this: dicklining.

The challenge (?) basically involves drawing a dick across your eyeball with your makeup. The craze was started by 19-year-old Asia Brautigam who posted the following on her Twitter account:

Whoa – check out how many likes and retweets that has got. That is some serious viral shit. As you might expect with a thing like that, a bunch of idiots soon cottoned on and you can see the results of this on Twitter below. Probably even more people going crazy for it on Instagram and Snapchat:

you have inspired me deeply pic.twitter.com/zTvkCxfhwe

That’s just great isn’t it? It would be better if these girls didn’t just post these pictures on their Twitter accounts and immediately wash them off though; I want to walk down the street and see someone looking like this. Seriously doubt that’s going to happen.

Even Asai herself kind of regrets ‘the movement’:

I just wanted to joke around about the creative and artistic eyeshadow looks.

I think make up artists are all creative and amazingly talented! My dick-liner will never compare! The whole thing got a bit out of hand really.

Well yeah I wouldn’t worry about it Asia, they’ll be another dumb viral trend in about a week and I’m sure this one will be all forgotten too. Don’t you worry. Great while it lasted though sure.

For more dicks, here’s a guy with two dicks talking about it on Reddit. Insanity.