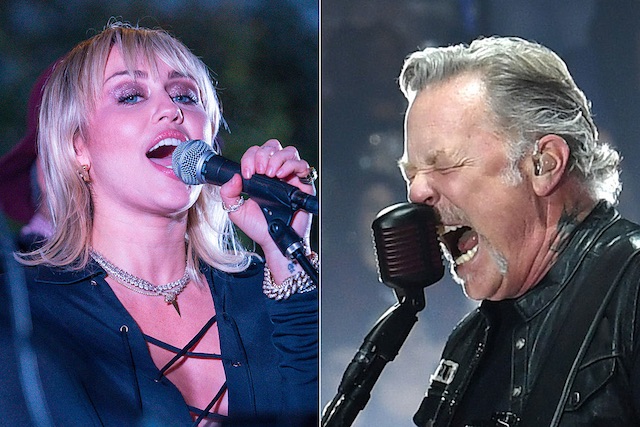 Miley Cyrus can’t seem to keep out of the news this past week, as not only has she revealed that she was once chased by a UFO but now she’s also decided to tell us all that she’s been working on a Metallica cover album during the lockdown.

Miley was speaking to Interview magazine when she decided to spill the beans, saying the following:

We’ve been working on a Metallica cover album and I’m here working on that.

We’re so lucky to be able to continue to work on our art during all of this.

At first, it felt uninspiring and now I’ve been totally ignited.

Give her fuel give her fire give her that what she desires? In all seriousness though, the thought of Miley Cyrus woking on a Metallica covers album is probably enough to make some hardcore fans of the biggest band in metal run to the hills (no, that’s Iron Maiden) screaming, but if you actually know anything about Miley then you’ll know that she’s actually a badass and will probably absolutely kill this. If you don’t believe me, check out her cover of ‘Nothing Else Matters’ above and then let me hear what you have to say.

On top of all this, she’s also covered songs like ‘Jolene’ and Nine Inch Nail’s ‘Head Like A Hole’ and they completely slapped so I think this is gonna work out OK. Hell, she smashed The Cranberries’ ‘Zombie’ just this week. Basically don’t worry about it.