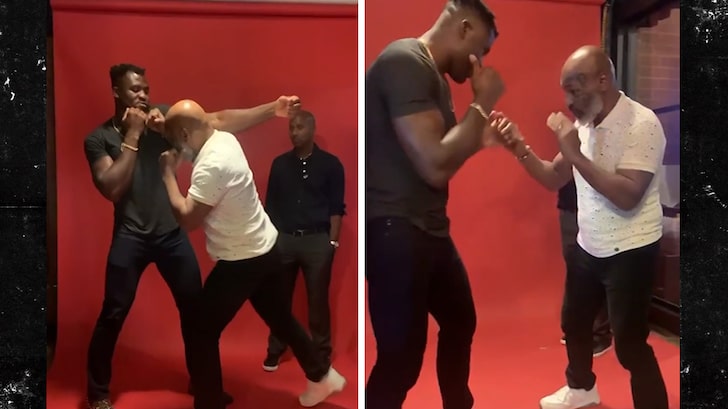 Learning from the best.

If you hadn’t heard, Tyson Fury has been teasing a move to MMA recently and he’s deadly serious about it. He even called out 6’4″ beast Francis Ngannou as a potential opponent.

Luckily for Ngannou, he was on Mike Tyson’s ‘Hotboxin’ podcast recently and Tyson gave him a few pointers on how to demolish his opponent’s body. Talk about learning from the best:

Great stuff. I just love watching Mike Tyson in his element. Doesn’t matter if he’s 53 years old, that psycho from 30 years ago who was knocking out everyone in his path is still in there somewhere, and once Mike gets into boxing mode that psycho starts to come out.

Few months ago he even told Joe Rogan how he avoids working out because it ‘activates his ego’. Here’s the clip:

Hopefully that’s the feeling he was getting showing Francis Ngannou some moves there because it would be great to see Tyson give more tips and techniques and demonstrations on camera like this. I know he’s busy with this marijuana company and breeding pigeons and whatnot but it would still be pretty cool.

Tyson Fury says he’s speaking to Conor McGregor and is ready to make the move into MMA, so let’s see what happens. If he does end up fighting Francis Ngannou I just hope Mike Tyson is somehow involved, if only because he would be excellent at the press conferences.

Conor McGregor eat your heart out:

For the time Mike Tyson made Piers Morgan smoke a joint on his podcast, click HERE. Classic.